SheKnows’ Girl Crush Extra goes whale watching, wants to be a candy blogger and shares that her favorite book is Prince of Tides. We are officially in love with Awkward‘s Molly Tarlov.

When SheKnows sat down with Molly Tarlov over lunch in LA, the actress cheerfully agreed to let us pick her brain while she picked at her food. And, naturally, we couldn’t wait to ask her what’s in store for Sadie Saxton — her character on MTV’s hit show, Awkward.

Piquing our curiosity, she promises that Season 3 of the teenage dramedy is going to be “crazy”… not to mention include a cute new romance for Palos Hills High School’s resident b****.

“For Sadie, since that’s all anybody’s interested in,” jokes Tarlov, “we see a lot more of the friendship that Sadie has with Matty, and also a boy that we met in the first half of the season comes back. His name is Austin, and we see a lot more of that relationship flourish — which makes me a smitten kitten, ’cause they’re so cute together.”

And on TV, cute couples often equate to lots of kissing. When we ask whether she ever feels awkward shooting make-out scenes, Tarlov laughs. “Umm, you know, I’ve done a lot of kissing on camera now, thanks to being on MTV, and it’s not that weird to me.” Albeit, she admits that puckering up with a room full of people watching is a bit surreal.

Still, making out in front of a film crew in character can’t compare to the memory of her worst kiss in reality. “I had built this guy up so much in my head,” she recalls. “I was like, Remember, Molly, that you are not enjoying this that much. Just remember please.” Needless to say, the relationship didn’t last.

On fame and fans

When we ask her what’s hardest about being famous, she fires off a response with endearing modesty. “Well, first, thanks for saying I’m famous,” she smiles. “I think that when you get into this business, you already have it in you that you’re never satisfied. So that’s what really the hardest thing, because we’re all always terrified.” Terrified, she says, of waiting for the other shoe to drop.

“You’ll have days when you’re so happy and loving everything,” she says, “but it’s just, like, so scary because as soon as amazing things happen, you’re like, ‘But when is it going to go away?’ So I think that might be it.”

If Tarlov’s fans have anything to do with it though, she’ll be around for the long haul. When we posted on our social media pages that we’d be interviewing the actress, we were flooded with questions from viewers who can’t get enough of her.

Tarlov finds the attention both flattering and inspiring. “There are a lot of people who reach out to me and tell me — and I feel kind of stupid saying this — that I inspire them to be themselves,” she says, “and if that’s true for even one of them, that’s awesome.” She cites fans’ encouragement as one of the reasons she’s been able to stop judging herself so harshly… even when others do.

“Lady Gaga said that for every mean comment there are two nice comments below it, and I was like, You know, that’s true,” she shares about the criticism that comes with being on a hit TV show. “And I decided I cannot spend more energy concentrating on the negative than I do on the positive.”

Positives, she gushes, like sweet fans who offer her their sincere support. “A fan — whom I kind of consider my first fan because she was the first girl that ever sent me a video of themselves talking to me, and I was like, Oh my gosh! — sent me a friendship bracelet that she made.”

When she isn’t filming the show or responding to fan mail, Tarlov spends her spare time exploring. “I’m learning more about myself every day,” she exclaims. “I feel like in the past few months, I’ve become just ready to, like, try new things.”

Unlike many of the socially inept characters on her show, Tarlov has also been enjoying making new friends. “You know how you meet girls and you’re like, ‘You’re really cool; we should hang out!’ and you never do? I’m actually doing that.”

Plus — and she’s really proud of this — “when I buy a Groupon, I’m using it.” Last week, she bought a surf lesson. And she would have used it over the weekend had she not have already had plans to go whale watching.

Clearly, the girl lives a well-rounded life. But there are still a few things still unchecked on her bucket list.

On her dream job… er, jobs

Like, for one, being a candy blogger. “I actually, last night, tweeted about how I really want to be a candy blogger,” she says, “Like, legit candy. Yesterday, I was talking about maybe trying to do my yoga teacher training, and my friends were like, ‘Yeah, you should be a yoga-teacher-slash-candy-blogger.'”

If that doesn’t work out though, she’d also like to eventually write and star in her own half-hour comedy sketch — she’s currently taking a writing class. “Mindy, New Girl, Girls … I love watching them, and just the female voice,” she explains.

She also wouldn’t rule out starring in film adaptations of her favorite literary works — the play Who’s Afraid of Virginia Woolf?, by Edward Albee, and the novel Prince of Tides, by Pat Conroy — or filming alongside her favorite actor, Dustin Hoffman. 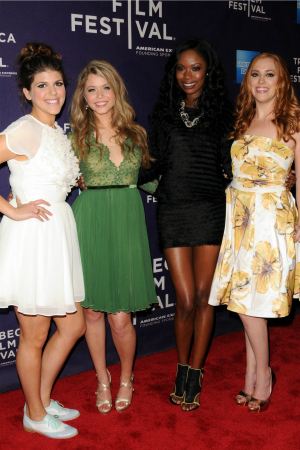 On her next big role

Up next for the actress, however, is the release next year of the film G.B.F. — a fresh take on what it means to be, or have, a “gay best friend” — with co-stars like Pretty Little Liars’ Sasha Pieterse.

Tarlov was immediately taken with the script and her character, Sophie. “Someone described me as the alterna-teen,” she says of the role. “She’s kind of the moral compass of the movie, so she’s like the real friend, and she’s the one who doesn’t get mixed up in any of these popularity things.”

Plus, the movie has a message that she feels will resonate. “It’s just like a really fun, really well-written movie that I think might help some people and touch some people in different ways than others, because it is about being gay in high school,” she says.

She knew she wanted the role as soon as she read for the part, because she realized it would be something that she would want to watch … much like her star-turning role as Sadie Saxton on Awkward.

“I always say that — I don’t always say this; I’m going to say it for the first time now,” she laughs, “but the thing that would have bummed me out most about not getting Awkward is that I would not have been able to watch it because I would have been so sad if I wasn’t on it. It just seemed like something I would have loved to watch so much, you know?”

What’s a quirky fact about you?

I got my septum pierced and asked them to flip it up because, you know, you can hide it. They were like, It’s swollen — you’re going to have to wait a few days. When they couldn’t do it, I had them take it out. I only had it for like an hour!