James Van Der Beek has come a long way in 15 years, and he is excited about the upcoming birth of his third child. 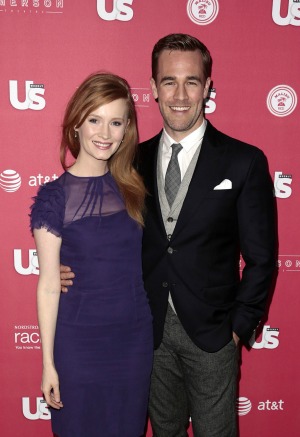 James Van Der Beek will forever be known as the teen heartthrob on Dawson’s Creek, but the actor is all grown-up now. Van Der Beek landed the role of Dawson Leery when he was only 21 years old, but 15 years have passed since the beginning of the show that made him a household name.

The 36-year-old actor is now married and has two children, and he recently talked about how those births changed his life forever.

“I think fatherhood changes you from the inside out,” Van Der Beek told People. “It’s not this thing where you think, ‘Oh, I have to be responsible, I have to take more on.’ You just want to, almost automatically.”

James and Kimberly Van Der Beek are expecting their third child, to add to their growing family: 3-year-old Olivia and 1-year-old Joshua. James referred to his family as “rapidly expanding our ranks.”

He has also gotten so used to the busy household with two children that he doesn’t know what to do without it.

“The other day, I had a morning to myself in the house and I didn’t know what to do with myself,” Van Der Beek said. “I had about 45 minutes before I had to go to work and there was nobody in the house. I had no idea what to do!”

Dawson’s Creek reunion a go? Michelle Williams is in! >>

Even with his newfound freedom that day, Van Der Beek did what he could to help his family.

Van Der Beek recently offered some good news to all Dawson’s Creek fans. He said he could be open to a reunion of the show. He will be seen next in Labor Day, along with Kate Winslet, Tobey Maguire and Josh Brolin.