Wedding bells ring for Danielle Fishel as she marries a much younger man. We’ve got insider details on how the couple fell in love despite their seven-year age gap. 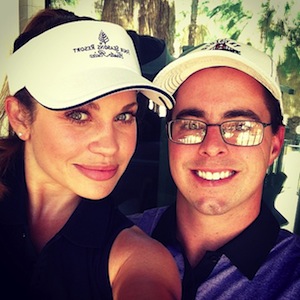 Fishel and Belusko began dating in 2008, when they met as students at California State University, Fullerton. Despite the fact that their birthdays are almost a decade apart — Danielle is 32 years old while Tim is just 25 — the couple didn’t let their age difference stop the romance.

People magazine confirmed the couple’s happy nuptials, and Danielle told the celebrity magazine that their ceremony was “short and sweet” and that the theme of their wedding was traditional, with a flair of modern fun.

“The most important thing is that the day feels authentic to us,” said Fishel to the magazine. “We’re traditional, but also a bit wacky!

“Tim is the one,” gushed Fishel. “He accepts me for exactly who I am!”

Fishel wore a strapless Enzoani wedding gown and walked down the aisle to “Forever” by Brian Culbertson. Fishel and Belusko exchanged vows at the Cathedral of Saint Vibiana in the heart of downtown Los Angeles.

Danielle told Maxim magazine in March 2013 that she was initially attracted to Tim Belusko because of his amazing Mortal Kombat tattoo.

“What I first noticed about my fiancé was a Mortal Kombat tattoo on his calf,” she said. “I’m not a huge tattoo person, but I loved it.”

Fishel also confessed she has two tattoos herself, one on her neck as well as a self-proclaimed “tramp stamp.”

Danielle Fishel will reprise her role as Topanga Lawrence for the upcoming sitcom Girl Meets World, which is set to debut in 2014 on ABC. The television show is a spinoff of Boy Meets World and centers on Riley (Rowan Blanchard), the daughter of Topanga and husband Cory Matthews (Ben Savage).

Despite the rumors, Fishel denies she and Savage were ever a couple like their characters on Boy Meets World were.

“That rumor was entirely my fault because I once said, on the Tyra Banks Show, that Ben and I went on a date, and that turned into ‘Danielle and Ben dated.’ We went on one date, when I was about fifteen, and by the time that dinner was over we realized mutually that we were more like family than lovers.”

Despite her dating past, we’re happy to report that Danielle and Tim are already enjoying married life. Just a few minutes ago, Fishel tweeted about the overwhelming joy she felt on her wedding day.