The Pretty Little Liars girls are taking to Facebook for their first live interview, in which they’ll be answering fan questions after the explosive Season 4 finale. 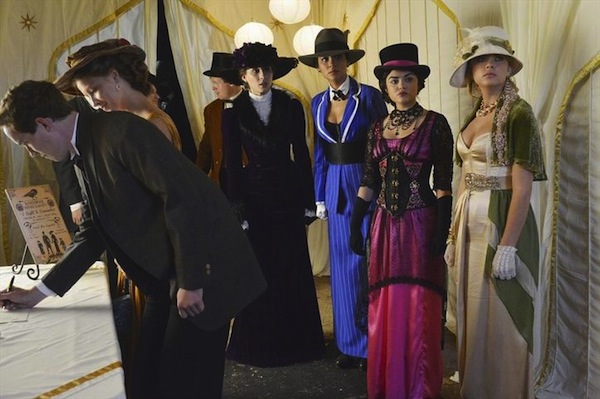 The stars of ABC Family’s Pretty Little Liars will sit down for a Facebook Live event this Monday, Oct. 21, at 5:00 p.m. EDT/2:00 p.m. PDT, as confirmed by TheWrap. Though the show is heading into the second half of its fourth season, Troian Bellisario, Ashley Benson, Lucy Hale and Shay Mitchell haven’t done a live interview together until now.

WARNING: Do not continue reading unless you’ve seen the Season 4 summer finale. Spoilers below.

The actors will answer fan-submitted questions and chat about the upcoming Halloween special, which has traditionally been a popular episode. This year’s special will air on Tuesday, Oct. 22, on ABC Family.

By the looks of the Pretty Little Liars Halloween episode preview, the girls will still be in Ravenswood when the show picks up. Their quest for Alison will continue, and a red “Help me” painted on a brick wall may just lead them on a wild-goose chase. Who knows what’s lurking in the shadows — but we’re guessing it isn’t Ali.

“After the summer finale, we know fans have a lot of questions, and this is a great way to spark conversation,” Danielle Mullin, vice president of marketing at ABC Family, told TheWrap.

Mullin said the network is hoping to add to its nearly 12 million Pretty Little Liars fans on Facebook through the interview.

Here’s what we’re hoping the stars will discuss:

Tyler Blackburn will also be around during the interview to debut an exclusive new clip from the Pretty Little Liars spinoff, Ravenswood.

What do you hope to find out during the live interview on Monday?