Parasite, the first book in Mira Grant’s latest series, is a perfect read for Halloween. We love the way she sucks her readers into situations that seem terrifyingly plausible, and this book is no exception.

Mira Grant is the pen name of urban fantasy author Seanan McGuire. As Mira Grant she is also the author of the hugely popular Newsflesh series. Both the Newsflesh and Parasitology series have as a major theme the moral complexity of medical research and scientific advances, but both series also explore that theme with inventive and well-written stories populated by characters you can’t help but root for. 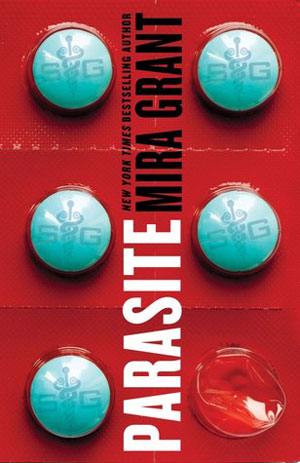 Once upon a time, Sally was, well, not a particularly nice person. That person is gone now, though, ever since Sally’s car accident. When Sally woke up from the coma, not only could she not remember what happened in the accident, but she also couldn’t remember a single thing about her former life, or even the basic rudiments of communication. Now she calls herself Sal and occasionally uses odd words in her quest to relearn everything an adult should know.

When it finally seems like things are starting to go Sal’s way — she’s in a great relationship and enjoys her job — strange things begin happening all around her. People seem to be losing control, acting in an inhuman manner with almost zombie-esque results. These people are causing car accidents and panic in public places, and then they become violent.

Red Hot Book of the Week: Wool by Hugh Howey >>

After an incident at SymboGen, Sal and her boyfriend become convinced that the health care company and their Intestinal Bodyguard (a genetically engineered tapeworm that acts as essentially any medication you might need) are somehow behind the strange phenomenon. As they begin to investigate, they’re drawn in by a mysterious source and getting in contact with this source will change everything they think they know.

The concept of a genetically engineered tapeworm that alleviates all need for medication seems far-fetched, but Mira Grant has a skill for convincingly showing us where medical science could conceivably go, even if the result (zombies — essentially magical tapeworms) seems less than strictly likely. She does enough world-building that suddenly everything seems plausible, and does it without sacrificing plot and character development.

If you’re looking for a really smart and slightly creepy science fiction read this Halloween, you can’t go wrong with Mira Grant’s Parasite.