Instead of being rushed to the stage, teen heartthrob Austin Mahone has been rushed to the hospital — where he is being treated for fever, dehydration and a blood clot. 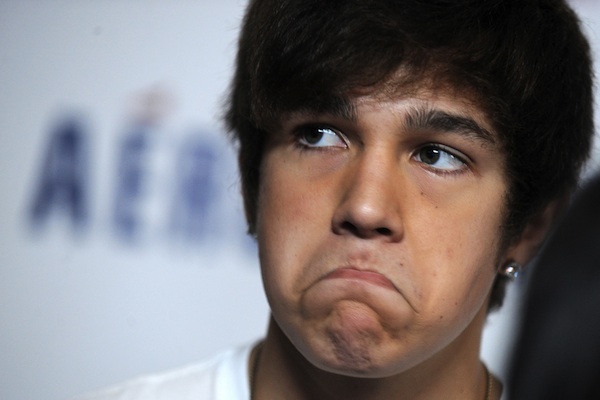 It’s tough being sick. It’s even tougher when you are a teen heartthrob, people call you “Baby Bieber” and you are supposed to be out on tour.

On Thursday, Austin posted this picture on his Instagram account with the caption “I’ve never felt so bad”: 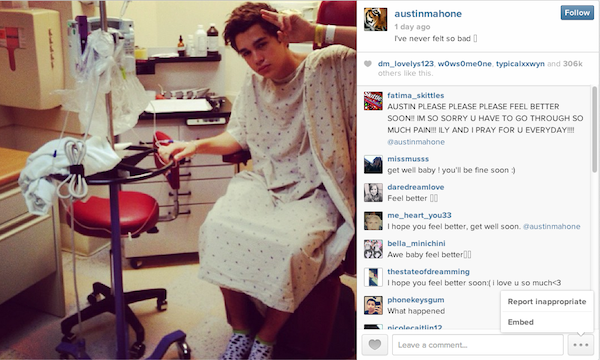 Don’t take this the wrong way, Austin, but you’re not looking so great either.

It turns out that Austin was “admitted to the hospital with 104 temperature and is being treated for a blood clot and extreme inflammation in his throat, as well as severe dehydration,” according to a rep for the singer, as told to the website Gossip Cop.

The pop star had sold-out concert dates scheduled as part of MTV’s “Artists to Watch Tour,” but those dates are going to be rescheduled.

His mom confirmed the postponed concert dates with a message on the singer’s official website:

Hey Mahomies, its Austin’s mom Michele Mahone. Austin is very ill. Unfortunately we are going to have to postpone the entire MTV Artist to Watch Tour

We feel very bad but we have no choice but to postpone the tour for now. Thank you for your prayers #prayforAustin

His mom also posted a photo of Austin lying in a hospital bed.

Let’s think of Austin in happier times — like singing his latest song, “What About Love.”