Selena Gomez had a misstep at a recent concert when she fell off the stage. But it’s not the fall that has both fans and critics talking. Check out the video. 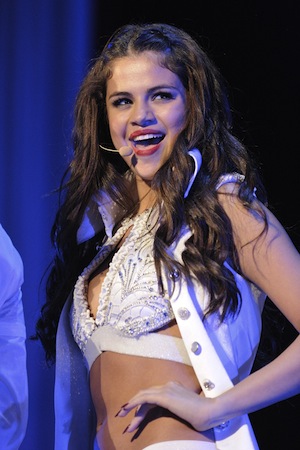 It was a scary moment (OK, maybe just embarrassing) for Selena Gomez last weekend as she accidentally fell off the stage during her concert in Virginia.

Instead, she was singing “Slow Down,” and she was dancing so much that she didn’t realize she was dangerously close to the edge of the stage.

In the video posted by YouTube user Dragongirl616 (who seems to have had a pretty great seat for the show, by the way), Selena is seen in a short gold minidress and high-heeled boots as she comes onstage for her recent hit.

Selena and her dancers prance around the stage and onto runways that take them into the audience.

Selena’s upset about the mean Beliebers >>

After everyone returns to the stage, there is some more dancing, and then the streamers and confetti are released. Jumping ensues, and then Selena jumps on the edge of the stage, slips and falls onto the runway.

She tries to cover up her slip by glad-handing with the crowd during her recovery, but it’s pretty clear she fell. A backup dancer then rushes to her aid, and Selena is back up like nothing happened.

Is Mariah the queen of awesomely bad lip-synching? >>

But something did happen, and the YouTube comments are all about the amount of playback Selena was using during the song.

See, when she falls (at about 3:25, if you just want to skip ahead), you can hear a little squeak from the songstress — but her vocals go on as if nothing had happened. We know she’s not a ventriloquist, so how can she possible squeak and sing at the same time?

The answer is playback. She’s not actually singing everything you hear at the concert. It’s really not a secret, but many YouTube fans are a bit upset that Miss Gomez relies so heavily on playback — especially for one of her most popular songs.

Take a look at the accident in the video below and let us know in the comments what you think about her use of playback.