Sylvester Stallone and Arnold Schwarzenegger might be the biggest action stars on the planet, but that doesn’t mean they were always friends. 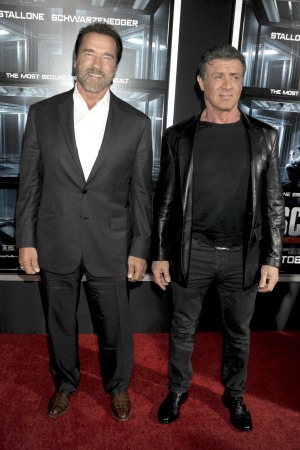 They might be action-star icons, but it took a long time for these two actors to become friends. On Tuesday night’s Late Show with David Letterman, Sylvester Stallone confessed that Arnold Schwarzenegger was his No. 1 rival back in the 1980s.

The 67-year-old star told the late-night host, “We had a violent hatred. Have you ever had that, ever? Competition where you really had an archenemy that kind of brings out the best in you. As Arnold would say, ‘It really pushed you to accelerate.'”

Ironically, Letterman did have his own enemy in fellow talk-show host Jay Leno, who was the heir apparent to The Tonight Show throne after Johnny Carson retired. It was a situation that was probably very easy for the CBS star to understand.

For the Rocky actor and the former governor of California, though, their battle became so extreme that Stallone hated “that [Schwarzenegger] was on the planet, basically.” While the two never came to physical blows, they found a way to battle it out on the big screen.

Both actors have had very successful career with Stallone cashing in on franchises like Rocky and Rambo while Schwarzenegger was globally recognized for his Terminator films. With their rivalry now behind them, the two teamed up for a joint venture with The Expendables which debuted in 2010. They have subsequently filmed two sequels and are now starring in Escape Plan which opens on Oct. 18.

With one rivalry behind him, maybe Stallone can end his feud with Bruce Willis?