The royal tummy is flat as a board again just a few months after Kate Middleton gave birth. 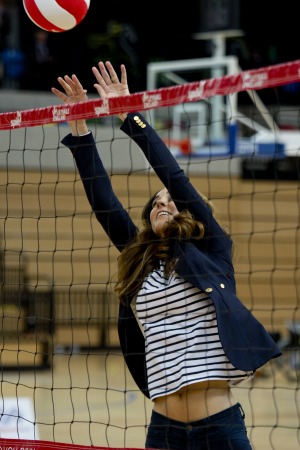 Kate Middleton is back in her skinny jeans just three months after giving birth to Prince George, and you know the adage “just because it zips doesn’t mean it fits?” That so does not apply here.

Kate Middleton has completely bounced back to her old body just three months after giving birth to Prince George!

The Duchess, who made her first solo personal appearance since the birth at a sports workshop by the charity SportsAid held at Queen Elizabeth Olympic Park, joined in a round of volleyball and showed off a perfectly flat and toned tummy while reaching for the ball.

Kate wore her favorite J Brand skinny jeans, a Ralph Lauren white and navy striped top, a one-button navy blazer by Smythe, Stuart Weitzman wedges and Kiki McDonough diamond earrings for the outing, with nary a muffin top in sight.

That the new mom bounced back so quickly is no surprise — she was quite slender before her pregnancy and appeared to gain a minimum amount of weight during.

“She got a couple of slam dunks — I think technically they call them spikes — in there,” he later told the press. “She’s very tall and athletic and we were all pretty impressed. SportsAid is a remarkable organization so it is very encouraging to see her here today learning about what they do.”

SportsAid’s chief executive, Tim Lawler, said of her visit, “The thing that has really struck me is how keen she was to see what we did in action. We are a charity about people, not great buildings. Every penny we raise goes to the kind of people you see here.”

“We always tell our young people that they are beautiful and inspirational and now we can say that about our patron too. She was very bright, very switched on and asked all the right questions. But more than that, she was very thoughtful and listened well; her listening skills were excellent. This is the first time we have been able to put her patronage into action and we are very excited about the future.”

The royal baby was believed to be at home with his dad Prince William, enjoying the family’s lavish new digs at Kensington Palace. When will we get another look at the tot? He’s scheduled to be christened next Wednesday at the Chapel Royal in St. James’ Palace, after which the couple will release an official portrait.