Melissa McCarthy has always seemed proud of her full-figured body, and critics thought her Elle cover would have been a great opportunity to show it off. 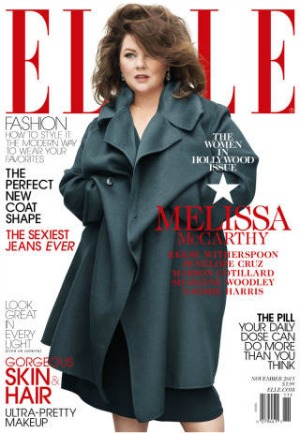 Melissa McCarthy scored a huge honor when Elle decided to make her the face of their 2013 “Women in Hollywood” issue. But controversy is brewing after people are saying the magazine did not honor McCarthy’s plus-size figure.

“McCarthy’s hair covers a quarter of her gorgeous face, and with her hands stuffed deep into her coat pockets, the only visible flesh is a tiny triangle between the coat’s lapels and the briefest glimpse of calf,” said Slate.com writer June Thomas, according to CNN.

Critics are remembering past actresses who appeared on the cover, including Reese Witherspoon, Shailene Woodley and Penelope Cruz, whose photos showcased their bodies.

The world of Twitter expressed their disappointment in the cover as well, although others applauded Elle for putting a plus-sized woman on the cover.

Elle has featured plus-sized women on the cover before, and Thomas explained that when Vogue put Adele on the cover in 2012, it became their second-best-selling issue that year.

McCarthy, who is one of the highest-paid women in TV, recently responded to a New York Times critic who criticized her weight. She said our society is living in “a strange epidemic of body image and body dysmorphia,” according to Today.

“On all of our shoots, our stylists work with the stars to choose pieces they feel good in, and this is no different,” a spokesperson for the magazine said. “Melissa loved this look, and is gorgeous on our cover. We are thrilled to honor her as one of our Women in Hollywood this year.”

Just after the shoot, McCarthy said it was a great experience.

“[Elle is] a magazine I grew up with and I hadn’t done anything quite like that,” the actress told Yahoo. “I was nervous. It was kind of amazing.”