Congratulations are in order for the very happy Kendra Wilkinson and her husband Hank Baskett. The couple reportedly are expecting baby No. 2. 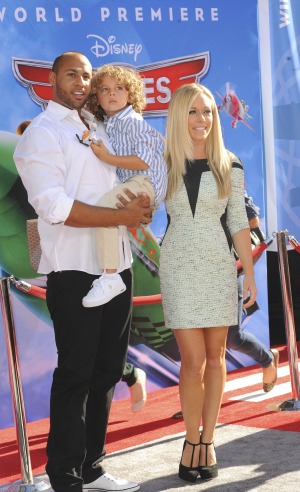 Kendra Wilkinson and Hank Baskett are expecting another addition to their beautiful family. That’s right, rumors are swelling that baby No. 2 is on the way!

A source recently confirmed the news to Us Weekly, saying, “She and Hank have been planning a second baby for a while, and they are very excited.”

If these reports are true, apparently the former Playboy model and her husband, former NFL player, Hank Baskett are eight weeks pregnant.

It is very possible that Wilkinson will soon be sporting a baby bump, because she has previously admitted to wanting to add to her family, telling Us Weekly in August, “We are trying, we are going to start now.”

“This is my first official announcement! We are very excited about making the decision to try!”

The former The Girls Next Door star wed her man in June 2009 and the couple seem happy and in love, not to mention completely doting parents to their almost 4-year-old son, Hank Baskett IV.

We have no doubt that the Kendra on Top star would be a great mother to baby No. 2, and it doesn’t appear the couple will have a problem being parents of two little tots.

Wilkinson previously told Us Weekly, “People make parenting so hard when it can be so easy. It’s about never feeling guilty, feeling good about what you’re doing and never going one minute without teaching him something.”

“Hank and I are very proud of our outcome as parents.”

The couple have not yet confirmed the reports, but we’re hoping the rumors are true and that adorable little Hank IV has a new sibling to play with in the near future.