Say hello to the witch from the other side. She really hates Silas. She really wants revenge. And she’s had 2,000 years to decide nothing else matters. 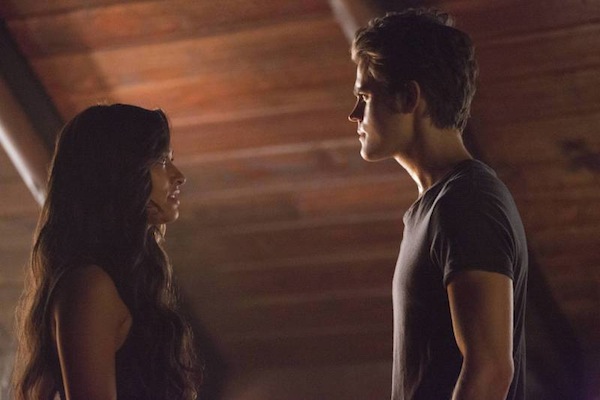 The games have begun on The Vampire Diaries and tonight we learn that Stefan (Paul Wesley), Elena (Nina Dobrev) and Damon (Ian Somerhalder) are all just pawns in a play that’s lasted 2,000 years.

Following the game is key, good thing we finally know the story works

Here are the roles:

Elena and Stefan as the fated lovers.

Damon and Qetsiyah as the obstacles standing between the fates.

At least, that’s how Qetsiyah sees it. She’s been burned by Silas and returns to the land of the living with plans to take him down.

The show is building on its past history, which we can definitely appreciate. Though it seems like parts of the story are just scrambled attempts to explain the doppelgangers, we’ll give them the benefit of the doubt. Why? Because the storyline actually works. It’s a relief to know there aren’t just countless numbers of doppelgangers running around the world. It’s just a precise number, and only Elena and Stefan are at the heart of it.

The interesting note is that there have been multiple Elenas and Stefans before Elena and Stefan. They weren’t necessarily vampires and lived and died as normal people.

Qetsiyah takes Stefan to her house and tells him to call her Tessa for short, but then everyone just calls her Qetsiyah for the rest of the episode. The nickname didn’t work so well. Good effort?

A needed recap on the past

If you’ve been following the show, then you know that Qetsiyah and Silas’ story is complicated. Tonight, we learn Qetsiyah’s side of the story, which is pretty much just another chance for the show to recap the history. We aren’t complaining. In fact, the recap was really helpful to rehash since last season.

In a nutshell, Silas tricked Qetsiyah into creating an immortality spell by proposing marriage. Once she’d created the immortality spell on their wedding day, Silas stole it and gave it to another woman named Amara. In a fit of rage and revenge, Qetsiyah found Amara, forced her to take the cure and then killed Amara. Here’s the thing: Silas is Stefan’s original doppelganger and Amara is Elena’s original. Since then, the fates have created multiple Silas and Elenas in a ripple effect to play out the love story.

The story may work, but what’s the angle with Stefan’s memory loss?

Qetsiyah wants to link Stefan and Silas’ minds in order to weaken Silas so they can kill him. Despite her crazy ramblings, Stefan agrees to the plan. Qetsiyah fries his mind but promises he’ll wake up. Silas loses his ability to read people’s minds.

But when Stefan wakes up, he doesn’t recognize Damon or Elena.

Poor Stefan has been through the wringer this season and it’s only Episode 3. Now what? He has no memory, but can he get it back? Will he and Elena get to know each other from the beginning again? Will he have no control over his blood cravings because he’s forgotten his years of learned control? This is just the beginning of our questions in this unexpected twist of the show.

What questions do you have after this episode to add to our list?