Is Donald Glover OK? After posting a series of troubling notes on Instagram, fans were rightfully concerned. Today, the actor reveals what’s really going on. 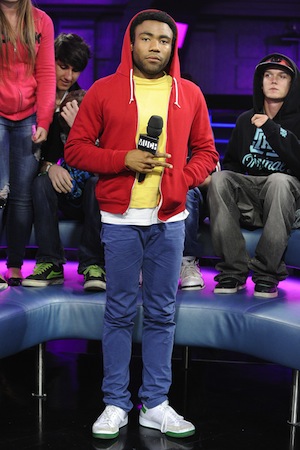 Fans of Donald Glover mostly know him as the hilarious Troy Barnes on NBC’s Community. He also has a budding rap career in which he’s called Childish Gambino. Whatever the name, there’s no doubt that Glover is extremely talented.

Monday, he shocked his followers when he posted a series of notes on Instagram. They were handwritten confessions that detailed the actor’s biggest insecurities.

“I’m afraid of the future,” he wrote. “I’m scared I’ll never reach my potential. I’ve been sick this year. I’ve seen a lot of people die this year. This is the first time I’ve felt helpless.”

These revealing words had fans concerned. So Glover reached out to People to clear the air. He tells the site, “That night, we had a show, and then afterwards, I had this moment of feeling like, ‘What’s the point? Why am I even here?’ I just wanted to write down my feelings. I definitely was just expressing myself.”

Many speculated about Glover’s mental state. Some wondered if he was suicidal. Even though he wouldn’t go in depth, he doesn’t think his feelings are unhealthy. “If I’m depressed, everybody’s depressed,” he says. “I don’t think those feelings are that different from what everybody’s feeling. Most people just don’t tell everybody.”

He continues, “I was just tired of telling people I was tired. It felt like every day someone would ask, ‘What’s wrong. Are you OK?’ And I would say, ‘I’m tired, I’m tired.’ I didn’t want to do that anymore. I guess sometimes not telling the truth is just as bad as telling a lie.”

In the end, Glover’s glad everyone read it. There are no regrets. He had to get it off his chest. He declares, “It felt like I had been holding on to something.”