I think there’s something so exciting about a new artist breaking into ‘the biz’ in a big way. There’s no right way to do it and, although there’s some luck involved, it’s also a lot of hard work and talent. Here’s my list of the five hottest young artists of 2013. 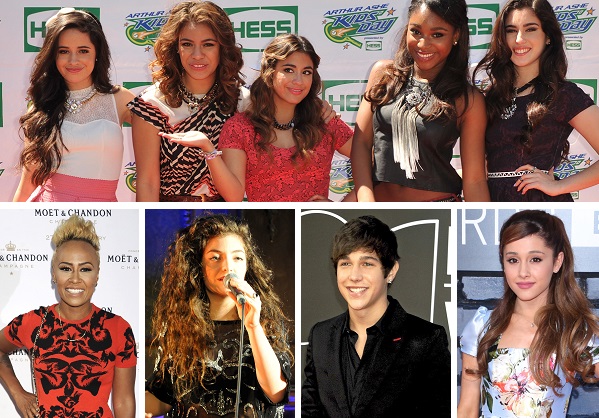 WHO: The girl who sings the “Royals” song. Did you know she’s only 16!? So much props to her for knowing who she wanted to be music-wise and going for it. It’s so unique and yet still broke through so many pop barriers.

WHO: I was a little skeptical at first, but he proved me wrong! Very talented, and I like that wobbly leg dance move he does in his music video for “What About Love.” He tried to teach me it when we co-hosted 10 on Top, but I failed epically.

Proof that Austin Mahone is moving in on Justin Bieber >>

WHO: Grande was previously on the Nickelodeon show Victorious and is now on the new Nick show Sam & Cat (as Cat). She also co-hosted an episode of 10 on Top with me last season, and she is so cute and little with such a big voice! She would sing in between takes, and I could’ve listened to her all day. She also just performed at the VMA pre-show with Austin Mahone. Luv her.

WHO: They were on the second season of the X-Factor as solo acts, and after they got kicked off, they joined forces! They are best known for their song “Miss Movin’ On,” but their cover of Justin Timberlake’s “Mirrors” is pretty cool, too.

WHO: Most known for her song “Next To Me,” check out one of her other song’s, “Heaven.” That voice!!! So good.

Music review: Emeli Sandé “Next to Me” >>

Who’s your favorite? Did we miss anyone? Let us know in the comments!