Boy, oh boy! Soleil Moon Frye is going to be thinking blue now that she knows the gender of her third child. 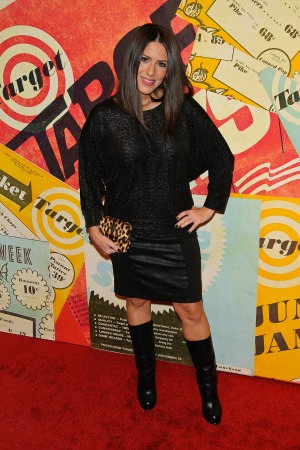 After two beautiful girls, Soleil Moon Frye is having a bouncing baby boy! The actress co-hosted The View on Wednesday where she revealed the exciting news in a clever way.

Even though she and her husband, producer Jason Goldberg, already knew the sex of the baby, she wanted to surprise her fans. She handed a box to host Jenny McCarthy who pulled out little baby blue shoes.

Frye shared, “I’m in a little bit of denial. I can’t imagine a penis growing inside of me, so I keep saying, ‘I think we know… but I’m not sure.’ I was so shocked because I always thought that if you have two of one sex, the statistics are that you’ll have a third of the same sex. So I just thought we’d have three girls. My girls still don’t completely believe it.”

Her two daughters, Jagger Joseph Blue, 5 1/2, and Poet Sienna Rose, 8, better get prepared for their new little brother. The couple’s son is due in mid-February.

The author of the new event-planning book Let’s Get This Party Started announced her joyous news on The Today Show back in August.

In addition to promoting her new book and preparing for her third child, Frye is back on TV. This time, her television project is a bit different than her Punky Brewster days. She’s hosting Home Made Simple on OWN which focuses on helping families simplify their homes and lives.