Selena Gomez burst into tears during a performance of her ballad “Love Will Remember” Wednesday night. The singer revealed her reason for crying onstage, and it was not because of Justin Bieber. 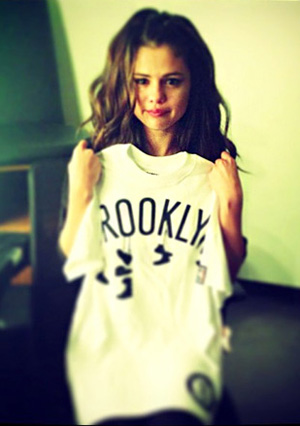 During an emotional performance in Brooklyn, New York on Wednesday, Selena Gomez broke out sobbing as she sang her ballad “Love Will Remember,” creating speculation that she’s not over Justin Bieber. But Gomez revealed the reason she cried, and it wasn’t because of her famous ex.

While Gomez’s sad song is believed to be about Bieber, she insisted that she was crying for her fans, and not because of the pop prince. An original leaked version of the song contained a sweet voicemail that Bieber left for Gomez when they were still together, which gave fans all the more reason to believe her weeping may have been for the Biebs.

Selena Gomez excited to finally hear her music at a club >>

But after her onstage meltdown, Gomez shared a photo of herself with a Brooklyn T-shirt and a caption explaining the real reason for her tears:

“Never ended such a beautiful show in tears because they wouldn’t allow me to Instagram tonight,” Gomez wrote. “Completely heartbroken and pissed. Thank you SO much Brooklyn. I’ll be stopping outside Letterman tomorrow to make it up if you can make it. I love you guys more than you know. Promise.”

Apparently, Gomez always takes pictures with fans after her shows, but this time around producers would not allow it for some unknown reason.

Meanwhile, TMZ reported that fans told the site Gomez had cried the night before while performing the same song. No word on whether she was allowed to take photos with fans that time.

Lots of speculation has run rampant since Gomez and Bieber broke up, claiming that the pair is still holding a candle for one another. However, the “Come and Get It” singer has made it clear more than once she’s over her ex and relishing the single life.

“I’ve known [Bieber] for a really long time and we enjoy each other’s company every now and then,” Gomez told the Associated Press in July. “But I’m definitely single and enjoying being that.”