The cast and crew of The Walking Dead offer a behind-the-scenes look at the making of the hit AMC series, which will include new twists and tricks as well as some ingenious ways to kill zombies. 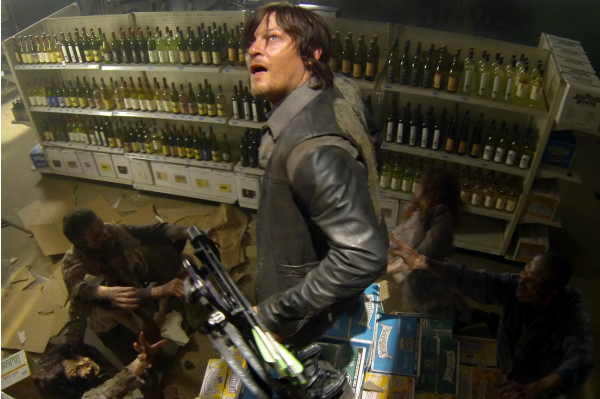 The Walking Dead premiered last Sunday with its highest-rated episode in the history of the series. Now that it’s shown it can bring in the numbers, it’s time to see what the show has in store for the rest of the season.

In a new video on The Wrap, some of the cast and crew take fans on a trip behind the scenes. In the premiere it looked for a little while that maybe Rick and the rest of the people in the prison were going to be able to relax into a new life, but that didn’t last for long.

“Season 4 is kind of a game-changer,” Denise Huth, co-executive producer said in the beginning of the video. “Everything always changes on this show, nothing stays the same for very long.”

Next up, you can see the cast and crew shooting a scene where the people in the prison are screaming and running for their lives. Could it be that poor Patrick is attacking or, worse yet, has turned some others into walkers as well?

Some fans may have noticed some new (and disgusting) special effects in the premiere. Expect those changes to continue throughout the season.

“We’re trying to put a new twist on a lot of things. Make everything a little bit better, more exciting. I it’s going to be an exciting season,” said Russell Towery, stunt coordinator for the series.

Art Director Doug Fick added that the crew has “found new and ingenious ways to kill zombies” and there are some images that follow that definitely prove that point. Expect to see a few zombie bodies, and even one getting its leg sawed off by a member of the crew.

John Sanders, property master on the series, added, “This season you’ll find some new tricks, for sure. Some of the things from the comic book are in this year, which is kind of cool. I like that some of the characters are really gonna put it on the zombies and that is really fun to watch. There’s some really good walker kills coming this year.”

There are also some great shots of Norman Reedus practicing some stunts and getting ready to kick some walker butt. “This season’s got a lot going on, it’s really fast-paced,” Reedus said.

Scott Wilson (who plays Hershel on the show) added, “The stakes keep ratcheting up every season. It’s going to be an interesting ride.”

Gale Anne Hurd, executive producer, called Season 4 the best yet. “We’ve really hit our stride,” Hurd said. “I think it’s going to be our best season yet because we’re facing threats from so many different aspects.”

Check out the new video below.