Robert Pattinson began an exercise regimen to be in shape for an upcoming film and by the looks of it, it’s definitely paying off. 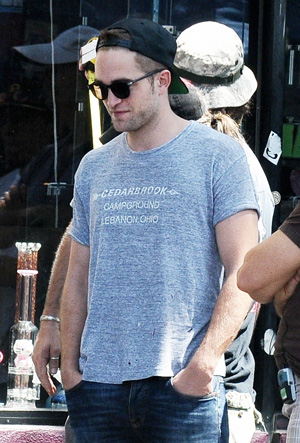 The handsome Twilight star was spotted out and about in Hollywood wearing a fitted navy tee and black shorts. The casual ensemble showed off Pattinson’s new muscles and tighter look, revealing that his workouts are definitely paying off.

Pattinson began a new exercise regimen with personal trainer Harley Pasternak to bulk up for his new role as a CIA agent in Mission: Blacklist. While not one to embrace fitness, the Cosmopolis hunk has been working out as much as he’s able, sometimes clocking in five days a week.

“He has really got it going on all cylinders,” Pasternak told Us Weekly. “He’s eating properly, he’s exercising… He’s not a fitness fanatic. He’s not someone who normally loves working out, but he’s just sort of in a rhythm now.”

Before beginning his new workout program, Pattinson had shared his hatred for exercise, admitting he rather do anything else than pump iron.

“I don’t have a six-pack and I hate going to the gym,” he told Australia’s Sunday Style last month. “I’ve been like that my whole life. I never want to take my shirt off. I’d prefer to get drunk.”

Pattinson also revealed that he often suffers anxiety attacks before going out on public appearances, and feels very insecure about his body.

“I get a ton of anxiety, right up until the second I get out of the car to the event, when suddenly it completely dissipates,” the new Dior spokesman added. “But up until that moment, I’m a nut case. Body dysmorphia, overall tremendous anxiety.”

His new shape is not the only thing Pattinson’s enjoying lately. After finally ending his relationship with Kristen Stewart for good earlier this year, the 27-year-old Londoner has been casually dating a few new girls. He’s also been rumored to be romancing Sean Penn and Robin Wright’s model daughter, Dylan Penn.