It looks like Miley Cyrus will be laughing all the way to the bank. The singer’s new attitude has sparked controversy and lots of haters. But, in the end, she is coming out on top. 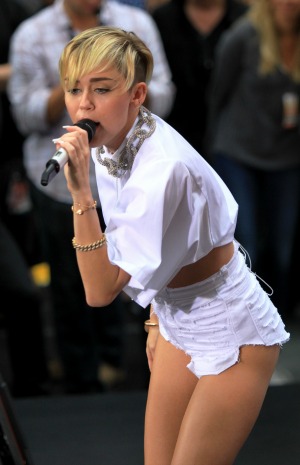 As much as people complain about Miley Cyrus’ VMA performance, the singer apparently knew exactly what she was doing. Not only did she dominate on SNL, but now she has herself a number one album. According to Billboard, the singer’s new album Bangerz landed at the top spot this week on their Billboard 200 chart, selling 270,000 copies in its first week out.

This is Cyrus’ second number one debut as herself — her 2008 album Breakout also came in at the top spot. However, if you include Cyrus’ alter ego, Hannah Montana, this is the singer’s fifth number one debut. Her solo 2010 album Can’t Be Tamed came in at number three when it was released, with 102,000 sold in the first week (still not a bad number for any musician).

The singer said all along she knew what she was doing.

“I don’t pay attention to the negative because I’ve seen this play out so many times,” Cyrus told MTV after the appearance. “Madonna‘s done it. Britney‘s done it. Every VMA performance, that’s what you’re looking for; you’re wanting to make history.”

Cyrus had tough competition this week too. Of the top 10 albums on the chart, seven of them were brand new this week. Panic! at the Disco landed at number two with their new album Too Weird To Live, Too Rare to Die, selling 84,000 albums. Rapper Pusha T’s My Name is My Name came in at number four with 75,000 albums sold in its first week.

A debut that may not be so surprising is the cast of Glee with their soundtrack to the Oct. 10 episode titled The Quarterback, Finn’s/Cory Monteith‘s tribute episode. The album sold 47,000 copies, and it may have helped that sales benefited the charity Project Limelight. The last time a Glee album landed in the top 10 was back in 2011.

The other debuts that landed in the top 10 include Korn, Cassadee Pope and Mayday Parade.