Now starring on the hit CW series Hart of Dixie, actress Rachel Bilson gabs with us about fame, fashion and what’s in store for her city-turned-country-girl character, Dr. Zoe Hart.

It’s hard to believe that it’s been 10 years since Rachel Bilson landed her first bona fide acting gig. The show? 8 Simple Rules for Dating My Teenage Daughter. Her credit? “Girl Chewing Gum.” Now, thanks in part to her turn as Summer Roberts on the wildly popular series The O.C., Bilson’s one of the hottest actresses in Hollywood — and a budding style icon to boot.

The latest reason for fans to love Bilson is her cute-but-conflicted character on the CW series Hart of Dixie. As Dr. Zoe Hart, the actress plays a city girl who finds herself feeling like the odd woman out when she moves to the small Southern town of BlueBell, Alabama. 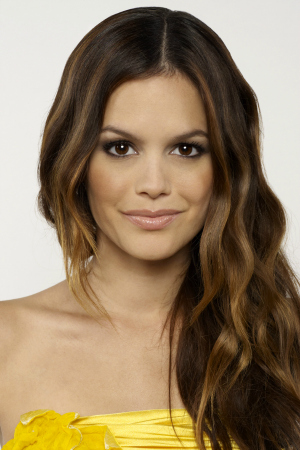 As such towns have a way of doing though, BlueBell manages to work its way into Hart’s heart. “It’s interesting, you know, because the whole series started with her feeling like a fish out of water from New York,” ponders Bilson, “and then, all of a sudden, she feels like she belongs in BlueBell.”

But, Bilson warns, it isn’t all smooth sailing when Dr. Hart returns. “She decides to stay and everyone has a bone to pick with her, because they blame everything on Zoe. Like, everything crumbled and it’s her fault. So, yeah, it’s going to take a minute for everyone to warm up.”

Fans need not fret though… the other residents of BlueBell do eventually let bygones be bygones. “They’re her family and she belongs there, which is really weird and I still haven’t wrapped my head around it,” she laughs. “But she does, in all its quirkiness and fried food.”

And, while she may partake of some of the region’s specialty fried fare, don’t expect her to tweet about it anytime soon — she doesn’t have a Twitter, Facebook or Instagram account. Why? Well, unlike many of her peers, Bilson isn’t a big believer in the overshare. “I don’t know… I just don’t find myself wanting to be like, ‘I just ate a burrito,’ and, like talk about it,” she laughs.

Lack of social sharing aside, Bilson claims Dr. Hart will endure enough “crazy” plotlines this season to keep Twitter aflutter with talk of her love square with Wade, George and newcomer, Joel.

“I think Zoe is very happy and very content in this relationship, so I think that he’s going to be around awhile,” she says about Joel. Then again, there’s no denying the chemistry she has with Wade. When asked if she thinks Dr. Hart will end up with Wade, Bilson doesn’t give too much away.

“It’s kind of funny because it was originally supposed to be George, and as things evolved, it turned out to be Wade,” Bilson says. “I don’t know… I feel like maybe they’re the hero couple, but maybe they’re not. It’s still a little murky at this point.”

What isn’t murky is Bilson’s spot-on fashion sense. Having landed on virtually every best dressed fashion list in circulation, the petite trendsetter often moonlights as a style columnist for magazines and — most recently — began collaborating with her friend and stylist Nicole Chavez to design shoes and looks for ShoeMint.com.

As such, we couldn’t resist asking Bilson about the stars who inspire her style. “Kate Moss is always impeccable. I love Alexa Chung, Sienna Miller, Ashley Olsen — people who have really individual style and they just make it look effortless.”

When she’s not acting or dabbling in fashion, Bilson steals every spare moment to enjoy her favorite perk of the job: travel. “I think that the coolest things is that jobs take you places you would never go most likely, and I think that’s pretty awesome.” While she remained mum on her favorite travel buddy, we have a sneaking suspicion it’s longtime (but relatively secret) squeeze Hayden Christensen.

And, as far as the paparazzi hounding her on or off the job — meh, she doesn’t mind so much. “It’s weird to complain about something that you feel lucky that you’ve been successful in,” she says. “It is what it is. I’m just grateful that I am where I am.”