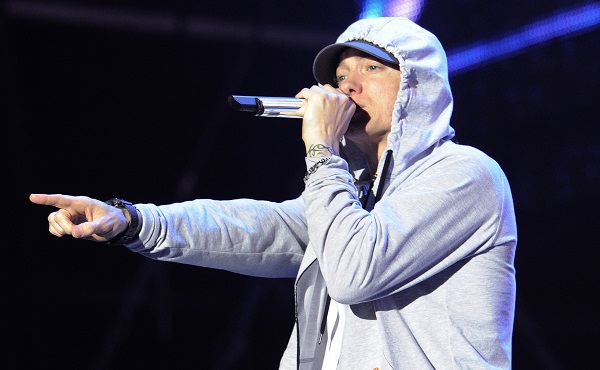 Eminem has a new album and he’s coming back to Saturday Night Live.

Don’t worry, Slim! We love you even if you’re a little awkward sometimes >>

The announcement came earlier today via SNL’s official Twitter page and they appeared just as amped as we are:

This isn’t Eminem’s first time on the show. Mathers actually made his debut on the show back in 1999 with his boy Dr. Dre when they did “Forgot About Dre.” In total, Shady has performed on the show five times already. Most recently, he took the stage with Lil Wayne earlier this year. And, while nothing can top seeing Dre and Em together, we especially loved the time he got down at the Weekend Update desk. We thought we’d share it with you, too. After all the somewhat depressing stuff Eminem has unleashed in the past, it’s nice to remember his goofball side. (And hear him channel his angry beast.)

We’re desperately hoping Em’s fun, snarky side will further resurface on his upcoming The Marshall Mathers LP 2, which releases the Tuesday following his SNL performance.

LP 2 marks Eminem’s highly anticipated return to the scene after yet another extended absence. His last album, Recovery, released in 2010. Since then he’s stayed mostly off the music scene aside from a few collaborations on other people’s albums. Em’s new record will feature appearances from Rihanna, Nate Ruess from fun. and Kendrick Lamar.

Eminem is another huge name Saturday Night Live has managed to land for this season so far — we’ve already seen Miley Cyrus and Katy Perry. But Eminem’s appearance will definitely have a sense of “ho, please” about it. Shady could easily do this gig with two broken legs and still make it the best of the season. Why? Cause he’s still loco enough to choke us to death with… his amazing lyricism. (Obviously.)

Guess who’s back! Or just sign up for our newsletter and we’ll keep you in the celeb loop >>

Mathers will take the Saturday Night Live stage on Nov. 2 and The Marshall Mathers LP 2 releases Nov. 5. Catch ’em both or you’re dead to us.