Jamie Foxx is talking about his so-called girlfriend Katie Holmes, but does she have her eyes on another leading man? 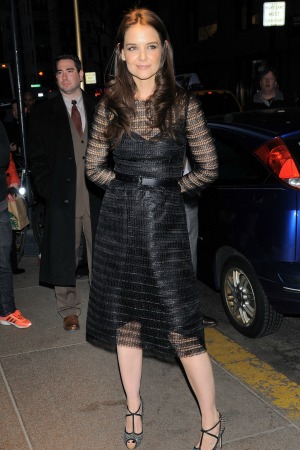 Are they or aren’t they? The rumor mill is hot with whispers turning into roars that Katie Holmes and Jamie Foxx are hooking up on the DL. Is it true? Insiders say yes, but Foxx says no.

“[The rumors] are one hundred percent not true,” he disappointingly told Entertainment Tonight. “In fact, it’s quite hilarious because we simply danced at a charity event along with a lot of other people.”

But insiders say it is totally happening.

“Katie and Jamie have been dating for a while,” a source told In Touch magazine. “They’re very Mission: Impossible about their romance.”

Of course, it is entirely possible that Foxx is simply trying to throw us off their trail. After all, last year he told Oprah he would never tell the public who he is dating.

Holmes, of course, was married to Tom Cruise, who starred with Fox in the 2004 flick Collateral.

So if Holmes is not dating Foxx, who should she date? Grazia magazine claims she has her sights set on none other than perpetual bachelor George Clooney.

“Katie and George have known each other for years,” a source told the mag. “They met through her ex husband Tom Cruise, and have always got on. Katie has had a crush on him for ages.”

“They’re both single and have met up a couple of times since the dinner party. Katie really has her sights set on him. There is a genuine connection. Katie and George are having a lot of fun. They are enjoying their new flirtation. He’s a fun guy with buckets of charisma and Katie loves his company.”