At least now we know why Justin Bieber was being carried up the Great Wall of China — he was making an unofficial music video for his new song “All That Matters.” 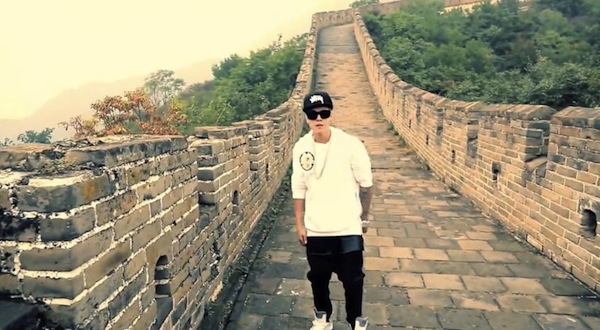 Two weeks ago, we saw Justin Bieber‘s bodyguards carrying him up the Great Wall of China. Now we know why. It turns out he was just recording his unofficial video.

Bieber’s getting advice from his mentor… Miley Cyrus? >>

Bieber’s unofficial video for “All That Matters” may have been shot in China, but it is now all over the world as it was just leaked online.

Bieber is doing just what you do when one you’re of the biggest pop stars in the world. You hang out in China in baggy pants and a leather skirt, lackadaisically dance and lazily lip-synch to your new song while standing on the Great Wall, of course.

Now granted, maybe this isn’t the video we were supposed to see. Alfredo Flores, the video’s director took to Twitter to express his frustration about the leak.

Oh, so evidently we are missing the 30 percent of the video that makes it all make sense.

Sarcasm aside, it really seems like everyone phoned this one in. I understand this is an “unofficial” video, but that begs the question: Why make a video at all if it just makes you look lazy? I mean, if he made the video just to show us all that he was in China, he could have just used the 5 second Vine app and saved himself lots of money.

Of course, that’s a bit too practical when you’re a big pop star.

Take a look at Bieber’s video for “All That Matters” and let us know if you think it’s a cute home video of his trip, lazy video making or both.