Of course, trailers aren’t just for movies. Katy Perry had several released in anticipation for the debut of “Roar.” But, I think this “American Girl” singer is pretty gutsy for releasing trailers for a follow-up song to her first hit. Must mean that it’s good! …But is it? 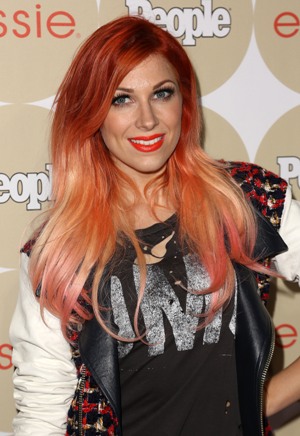 Her new release may be titled “Sleepwalker,” but I sure woke up when I saw that instead of just releasing a clip like a regular artist, Bonnie McKee has donned a pair of trailers to harness listeners in. Mission successful. I’m officially interested.

Katy Perry also had some tantalizing trailers for “Roar” >>

McKee has been around for some time, but her successful song “American Girl” is what gave music fans what they wanted. Though it may have been too “crisp linen” for me, even with her lyrics prompting rebellion and implied sexual innuendos, I was thrilled to see a darker “#inbetwingle” (this is what McKee describes as a song inbetween singles — how ingenious!).

Granted, it’s more spooky than “dark” — using the term dark usually means it’s got some grit — but that makes it all the more fabulous because Halloween is around the corner.

Showing us she’s got comedic wit, a lively, fierce attitude and a penchant for my favorite holiday, she’s sure to win over people with this uptempo collaboration with her boyfriend Oliver Goldstein and DJ Boys Noize.

The trailers are rated “RAD” (for Radical Audiences only), so I’ll let you imagine what all that entails. But I will warn you to keep the kiddos away, because sex, drugs and gore make an appearance. If that isn’t attractive to you, the song will definitely be. It’s got appeal for ’80s dance music lovers, and present-day EDM fans. She’s finally evolved into the bad girl she teased from “American Girl.” Most important, who can resist zombies?

Have I tempted you enough to press play and see what all the fuss is about? Hopefully so. Check out the two trailers and voice your opinion below!

Never miss a beat by signing up for our newsletter here >>

You only have to wait until tomorrow (Oct. 17) to find out what the entire single is like, but let’s hope it’s as good as the trailer suggests!