Not everything in life goes as planned, but sometimes the imperfect moments we’re left with make the best memories. 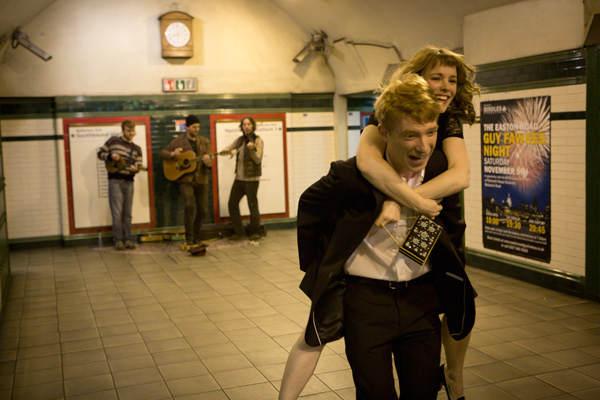 If you could go back in time and change your life, would you? About Time, starting in select theaters Nov. 1 and everywhere Nov. 8, is a film from the creator of Love Actually, Notting Hill and Four Weddings and a Funeral, that tackles just that question. Though the character Tim has the ability to revisit his past, he soon finds himself dealing with the consequences of changing those imperfect moments.

We all have those situations. The perfect moments we carefully plan and wait for don’t always unfold like we thought they would. Instead of getting all worked up over things you can’t control, sit back and take it all in. Sometimes those imperfect moments are the ones we cherish the memories of the most down the road. These are some of our favorite examples.

First kisses are almost never like the ones in the movies. It’s almost guaranteed that one of you won’t be ready for it, or you’ll both tilt your heads in the same direction. First kisses are awkward, and sometimes they’re embarrassing. The good news is that they’re over quick — so you can move on to the second and third kiss! While the first kiss is rarely the best kiss, it’s often one of the most special, so you’ll always remember it fondly — no matter how bad it was!

The first time you meet your boyfriend’s parents is a big deal. You want them to love you the moment you walk through the door, but all those nerves have a way of throwing a wrench into things. You probably talked a little too fast, and you may have drunk too much wine at dinner. It’s possible you laughed a little too loudly at his dad’s bad jokes, and his mom probably noticed when you let it slip that you’re already keeping a toothbrush at her son’s apartment. Oops! Not to worry. This will be something you’ll all sit around and laugh about — at least ten years from now. In About Time, Mary encounters a similar situation when she meets the parents and just can’t stop talking.

Your first night away from home

That ratty apartment was the stuff of nightmares. Your bookshelves were made of cinder blocks, and most of your furniture was either stained hand-me-downs or something you found next to a dumpster down the street. Once you were there, you instantly longed for Mom’s full fridge and Dad’s TV. Still, it was all yours. Years later, you’ll think of that place and long for the easy, carefree life you lived there, and you’ll smile at all the memories made under those cracked ceilings.

You had big plans. You and your friends had been planning it for ages, but for whatever reason, it didn’t happen. The concert was sold out, your ride didn’t show up or the bar was lame. You didn’t give up, though! You guys were dressed up and determined to have a good time — and you did! Sometimes, the nights when nothing goes as planned are the nights when everything goes just right. You’ll be looking back on those nights and smiling for a long, long time.

You’ve never fancied yourself a gourmet chef, but anyone can follow directions, right? At least that’s what you thought when you set out to cook that special someone your first homemade dinner. It probably wasn’t funny when you were trying to choke down that overdone meal, but it’s definitely something to laugh about now — over a dinner you’ve cooked to perfection, of course.

Every relationship has its moments, but that first big fight is a hard one to take. You’ll both probably say things you don’t mean, and you’ll feel like your heart is truly broken. Hopefully, one or both of you will come around, and it’ll be over as quickly as it began. A few years later, you may not even remember what the fight was about. You will, however, remember how ridiculously dramatic you were — and how much fun it was to make up!

Just about every wedding has at least one big flub. The tux doesn’t fit. The flowers are wrong. A baby cries during the wedding march. Someone makes an inappropriate speech. A bridesmaid gets drunk. The song is wrong. There are a million possibilities. No matter what it is, you’ll be positive the day has been ruined. Five minutes later, you’ll be the only one who cares that it happened. Five years later, it might be your favorite part of the day.

There’s nothing fun about having your head stuck in a toilet, trash can or bucket for three or four months. We won’t sugarcoat it — it’s downright miserable. Still, there will come a time, probably right after that baby starts toddling across the room, when you’ll look back on every single moment of your pregnancy with fondness and nostalgia. That’s right, ladies. We said every single moment — even the ones when you were more green than glowing.

The first night home with baby

You pictured that moment your whole life. You probably never pictured it with a baby who never stopped crying and two parents who wanted to cry right along with him. You got through it, though, and all the other nights just like it. Now, it’s just part of your bragging rights as a mom and something you bring up to your kiddos (often). It’s funny how thoughts of that scary night can now make you smile.

You can see it coming. She’s more tired than usual, crabby and looking a little pale. You figure you have a few hours until this cold, flu or whatever it is takes hold, so you scramble to get things done and prepare yourself. You know you’re both going to be miserable for the next few days. Surprisingly, those late-night cuddling sessions on the couch with coughing kiddos will actually be something you’ll miss years later.

Oh yeah, and let’s not forget the constant yelling from the backseat, “He won’t stop touching me!”

You’re ready to lose your mind, and you’re not even out of your state yet. Road trips with small children are enough to make even the strongest parents break, but they’re also the stuff wonderful memories are made of. Years later, you won’t remember the fighting and the 10,000 questions (or at least you won’t care!). You’ll just remember how her eyes lit up when she saw her first palm tree or how they begged you stop at that dino museum that turned out to be the best part of the trip.

You tried for what seemed like hours to get that perfect family shot. Instead, there’s something wrong with every single one. Silly faces, wiggling kids and wardrobe issues often lead to photos that are a little less than what you were hoping for. Years later, though, you’ll flip through that album and find that those less-than-perfect pictures are your favorite. They’re the ones that give you the real memories of who you were.

More fun for you