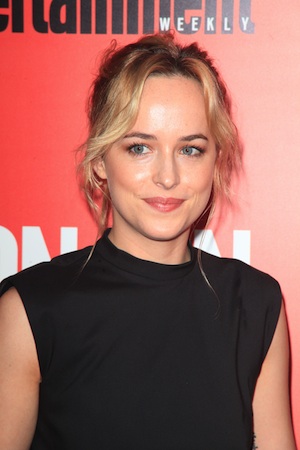 Dakota Johnson could exit Fifty Shades of Grey just two days after Charlie Hunnam announced he dropped out of the hotly anticipated film.

Johnson landed the lead role of Anastasia Steele back in September 2013 after Hunnam was cast as Steele’s love interest,  the charismatic but emotionally damaged Christian Grey.

Hunnam said he dropped out of Fifty Shades of Grey due to an “immersive TV schedule” that prohibited the Sons of Anarchy star from “adequately preparing for the role of Christian Grey.”

But within hours, rumors surfaced that Hunnam actually exited the film out of a growing fear he’d be typecast as a British heartthrob. “He didn’t want the Robert Pattinson-esque attention that would come along with taking on this role,” said a source to People magazine.

Another source for E! News said Hunnam doesn’t aspire to be famous and was worried the blockbuster movie would push his career in an undesirable direction. “He hates conforming and being told what to do. This role would force him to have to be something he’s not.”

With Hunnam officially off Fifty Shades of Grey, Johnson may soon own up to her rumored fear of playing the lead role of Anastasia Steele. E! News reporter Marc Malkin reported last night that a source close to Johnson reveals she is secretly struggling to prepare for the intense obligations that come along with such a coveted role.

“Dakota is having a very hard time dealing with all the press,” said Malkin’s source. “When she first got the role, it was way too much for her.” Johnson’s rep declined to comment on the rumor that the young, unknown actress may be leaving Fifty Shades of Grey.

However, other Hollywood insiders say that Johnson may not have a choice in the matter, given the context surrounding the decision to cast her as Steele. It was actually Hunnam who agreed with Fifty Shades of Grey director Sam Taylor-Johnson to screen test with Johnson back in September.

“We both suggested I do a reading with Dakota, who was [Taylor-Johnson’s] favorite. As soon as we got in the room, I knew that I definitely wanted to do it,” explained Hunnam. “There’s just a tangible chemistry between us. It felt exciting and fun and weird and compelling.”

So where does that leave Johnson? Many fans of the series were not thrilled — and some were even furious — at the decision to cast Johnson as the innocent Anastasia Steele. The most common complaint centers around the perception that Johnson looks much older than her Fifty Shades of Grey character.

Other Hollywood reporters say Hunnam’s exit from the film is actually a major advantage for the young actress since now Johnson will be able to take the spotlight that was so often on Hunnam.

“Unlike Hunnam, Johnson knows what it’s like to live under a microscope, having grown up in the public eye as the daughter of Melanie Griffith and Don Johnson,” said Hollywood magazine The Wrap.

“Multiple sources stress that the filmmakers will build the rest of the cast around [Johnson] rather than let the new Christian Grey dictate the ensemble.”