Stacy Keibler is one lucky gal! She found a boyfriend who not only takes her to Europe, he throws her a Bond-themed fiesta for her birthday. 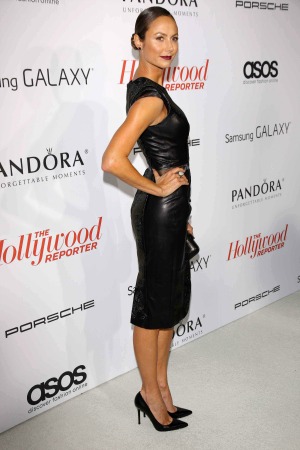 George Clooney seems to be nothing but a distant memory for Stacy Keibler who celebrated her 34th birthday on Monday with her new boyfriend. Jared Pobre is a guy who really knows how to step up to the plate and surprise his girlfriend.

The 38-year-old decided to throw a James Bond-themed birthday bash for his girlfriend of a few months. The party included women spray-painted in gold and the glamorous wardrobe required for any Bond girl.

A source told Us Weekly how impressed Keibler was by her boyfriend’s efforts, “She knew he had planned the party but she had no idea that he was going to go all out. She was blown away by how much effort he put into it.”

In the Instagram photo shared by the Supermarket Superstar host, she’s decked out in a sexy black gown with a revealing high slit while Pobre does his best Daniel Craig impression in a blue dinner jacket with a bow tie. The couple are flanked by two nearly-naked gold women.

The caption read, “Thank u Mr. Bond for the best Birthday week of my life.”

It’s been a great birthday month for the former Dancing With the Stars contestant because she spent the last week vacationing in Paris and Amsterdam.

A friend told the gossip site, “It was incredibly romantic. They have been friends for a long time but it turned romantic only recently. It has gotten really serious. They are both just smitten… He’s low-key and understated and she loves that about him.”

It looks like Keibler is doing just fine in her post-Clooney life.