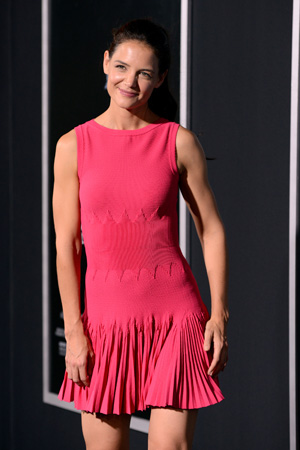 Katie Holmes and Jamie Foxx first sparked romance rumors when they were seen dancing together at the Hamptons for a benefit party in August. However, sources denied the claims and said the pair was just friends. But, now there are new reports that insist the famous A-listers are indeed dating and have been together for a while.

Insiders are saying that Holmes and Foxx are definitely an item, but that they’ve been keeping their relationship very quiet.

“Katie and Jamie have been dating for a while,” a source told In Touch magazine. “They’re very Mission: Impossible about their romance.” The source added that Foxx has been spending lots of secret time at Holmes apartment in New York City.

Another person-in-the-know told the magazine that when a witness at the Trump SoHo Hotel saw a limo pull up to take Foxx to the Annie movie set, he was blown away to see Holmes get in the car instead.

“A hotel employee confirmed that Katie had stayed at the hotel with Jamie and that she was taking his car,” another source told In Touch. “So the driver drover her home to her Chelsea apartment.”

Unlike with the Hamptons bash, there are no photos or video to show Holmes and Foxx together at the Trump hotel. Plus, the former Mrs. Cruise and her ex’s best friend were not really dancing in any suggestive ways at the party — although the pair was said to have been holding hands.

If Holmes and Foxx are indeed a couple, it’s not too surprising they’re keeping the relationship a secret. Foxx knows Holmes’ ex-husband, Tom Cruise, very well and the two were even best friends for a while. Going public could potentially have negative effects on both Foxx and Holmes’ careers.

However, if the alleged romance continues, it’s only a matter of time until it’s revealed for the world to know.

56 mins ago
by Daisy Maldonado