The Originals is finally getting to the heart of New Orleans. We’re talking about parties, of course. Except, they’re throwing blood instead of beads. 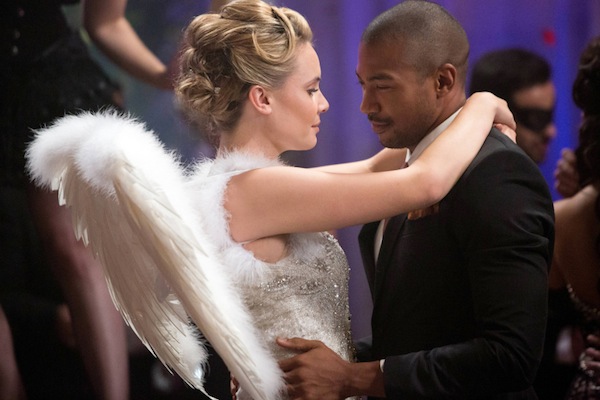 Let the twists and turns commence.

And we’re not just talking about the dancing in tonight’s masquerade-themed episode of The Originals. Klaus (Joseph Morgan) also puts his plan to take back control of New Orleans from Marcel into action. We have to say, the original bad boy is actually quite clever.

The war is on

Here’s the plan in a nutshell:

Recap of The Originals’ pilot premiere >>

The masquerade ball is the teenybopper version of The Great Gatsby. The show doesn’t even try to hide it. From the Lana Del Rey ballad to the rich guy hosting a party and feathered dresses, this episode is trying to bank on the stylized beauty Baz Luhrmann brought to the screen.

It’s no Gatsby, but the show doesn’t have to be. In a moment where The Originals is breaking away from The Vampire Diaries, the show should be trying to establish a unique identity, not copying something that’s already been done. Good thing the show doesn’t spend too much time dwelling on the overused masquerade theme.

The witch didn’t need magic to tell Hayley whether her baby was a boy or a girl, just a little bit of tradition. Still, when the witch offers to help Hayley, the witch ends up spouting some weird stuff in a different language. Since Hayley’s got some spare time on her hands, she’s trying to translate the phrase to English going through one language at a time.

What’s going on with that baby?

As she puts it, at least Hayley knows now she isn’t going to have a mini-Klaus on her hands.

The Originals review: Right to the romance >>

Other moments to note