Miley Cyrus already has someone in mind to replace ex-fiancé Liam Hemsworth — and if it works out, her new tattoo with hold extra meaning. 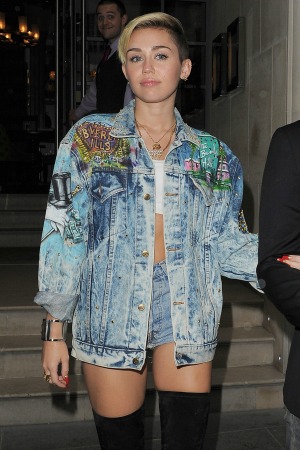 Miley Cyrus claims she’s “obsessed with being alone,” but the star is actually obsessed with her new love interest.

Cyrus is reportedly getting hot and heavy with Theo Wenner, heir to the Rolling Stone magazine fortune and son of publisher Jann Wenner. In fact, she is so into the guy that she snuck out of her Bangerz release party to meet up with him!

“Miley talks about how hot Theo is and how nice he’s been to her. She’s definitely completely in lust with him.”

The source said that while Miley was definitely living it up at the Bangerz release party in New York, including making out with everyone in sight, she still managed to make her escape to spend time with Wenner at his swanky hotel.

“He didn’t come to the release party, but she snuck out at one point and went and met him at The Plaza,” claimed the source, adding that when a beautiful bouquet of flowers was delivered anonymously to the party, Cyrus’ huge smile made it obvious who they were from.

“She said she’s never met anyone as sweet as Theo,” the source added.

Cyrus also reportedly left her Saturday Night Live wrap party to be with her new man.

“Miley was on her phone throughout the party at STK in Midtown texting Theo the whole time,” a source revealed.

“Just before 3 a.m., after receiving another text from Theo, she hopped up from her table and left the party abruptly, leaving all of her friends behind.”

Wenner was previously linked to a 10-years-older Liv Tyler. He works as a photographer for Rolling Stone and shot Cyrus’ naked cover, which she commemorated with a new tattoo on the bottom of her feet.