Liam Hemsworth is really enjoying being single and dating. The Hunger Games star was spotted on a date with a mystery woman who was not his supposed new love Eiza Gonzalez. 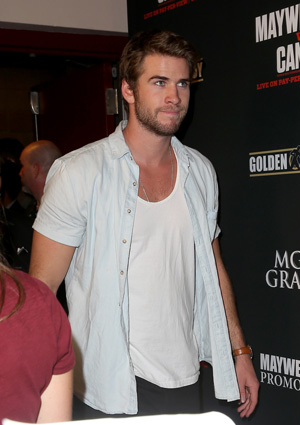 Not one to sulk from his breakup with Miley Cyrus, Liam Hemsworth is making the most of his single life. Just weeks after a heavy make-out session with Mexican sensation Eiza Gonzalez, Hemsworth was seen on a date with another mystery woman.

The 23-year-old actor was spotted going into a 10:30 p.m. showing of Gravity in 3-D accompanied by a mystery brunette. Then, once the show was over, Hemsworth was seen with the same woman at the AMC cinema’s bar. The sighting was confirmed by the Peachy Scoop, which is an online publication that reports all types of happenings around the Atlanta area.

Hemsworth is currently in Atlanta, Georgia filming Mockingjay: Part 1, the first half of the last Hunger Games trilogy installment.

It was never confirmed if Hemsworth was officially dating Gonzalez, but it seems he’s just having fun, dating around and seeing different women. No word on how serious things are with this new lady he was seen with.

Hemsworth and Cyrus finally broke up after numerous reports that claimed the couple had problems. While the “Wrecking Ball” singer has always been very vocal about her relationship, Hemsworth, on the other hand, habitually kept very quiet when it came to his private life.

On numerous occasions, Cyrus tweeted messages about her then-fiancé, and once problems began for the pair she posted photos with her engagement ring on and off multiple times. More rumors fueled up when Hemsworth was seen leaving a club with January Jones last February, and then was spotted with her at a party.

“They went to a private house party, and right in the middle of the party, January was clinging to Liam, saying, ‘You’re so handsome.’ He kept saying, ‘We can’t do this here,'” a source told PerezHilton.com, “Then they left holding hands and went out in the hallway and were making out. She was wasted. It wasn’t good.”

Cyrus has insinuated that it was she who initiated the breakup with Hemsworth, but the Australian hunk was said to be increasingly getting tired of her new wild side. As Cyrus’ look got trashier and her partying ways got out of control, it wasn’t too surprising Hemsworth began looking elsewhere for love.