Josh Hutcherson and Jennifer Lawrence have become the best of friends since joining The Hunger Games cast. But when it comes to the things they argue about, don’t expect too much turmoil in this friendship. 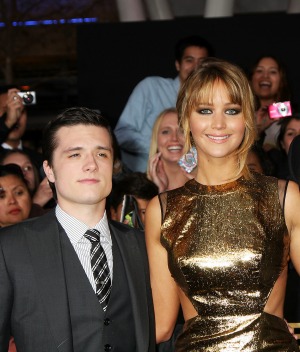 The Hunger Games co-stars Josh Hutcherson and Jennifer Lawrence have become great friends since landing the roles of Katniss Everdeen and Peeta Mellark in the series.

Hutcherson has also become something of a teen heartthrob, and will be appearing in the November issue of Seventeen magazine. He told the magazine the biggest thing the two friends argue out is who is funnier.

“We have this debate all the time — I think it’s me!” he answered.

“This sounds mean, but its true, and Jennifer would agree,” he added. “Her thing is being shocking, goofy, and silly — which is amazing, and it takes a talented person to do that. I like to be more clever and witty. But if you had to go on who gets more laughs, I’d say she’d be the winner.”

Both Lawrence and Hutcherson are Kentucky natives and landed their first big roles within just a few years of each other. Lawrence has dated co-stars in the past (including her on-again, off-again relationship with X-Men co-star Nicholas Hoult), and the two actors’ close friendship has spawned relationship rumors.

Hutcherson said he has been known to fall for girls for the wrong reasons, but doesn’t regret any of it.

“I was blind at first by looks, by love, whatever,” he explained. “I’ve been known to fall hard and quick for girls, which I think is better than not falling at all.”

Although he doesn’t regret falling for the wrong person, he said he would so much rather be on the other end of the breakup.

“I think getting broken up with is worse than breaking up with somebody,” he said. “For me, it hurts more when you’re ready for something to keep going and the other person isn’t.”

Hutcherson’s Seventeen interview will be on newsstands Oct. 22. The Hunger Games: Catching Fire is due out in theaters Nov. 22.