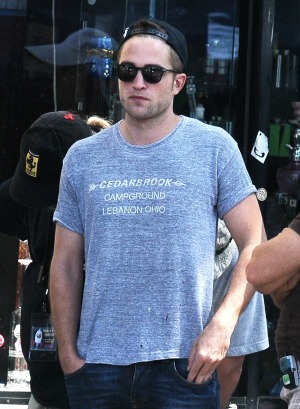 Robert Pattinson has revealed that the way to his heart is through his nose!

The actor recently revealed that he likes the way women smell and not just those wearing perfume… creepy?

The Hollywood hunk told Portuguese magazine Activa, “It doesn’t necessarily have to be perfume. I like the smell of people. It is really strange and I’m sure it has to do with pheromones.”

“We like people because subconsciously we like the way they smell. I always find this very interesting to observe.”

While science does support what Pattinson is saying, it is still a little strange for him to admit that he is attracted to women by their smell. Or perhaps this is all a clever marketing stunt on his behalf, since he is currently the face of the fragrance Dior Homme?

Pattinson is not the only one attracted to the natural smell of the opposite sex, because apparently his former flame, Kristen Stewart, shares his sentiments.

Having gushed to Vogue last year, KStew admitted, “I’m so in love with my boyfriend I love the way he smells. And him me.”

“Like, he loves to lick under my armpits. I don’t get this obsession with washing the smell off. That smell of someone you love — don’t you think that’s the whole point?”

Maybe that explains why the pair were so smitten with each other, because they share the same fetish! There was clearly something, shall we say magical, about their relationship and it reinforces the fact that the pair really do seem meant to be together.

We wonder if Dylan Penn, Sean Penn’s daughter and latest flame of the Maps to the Stars actor, enjoys her beau trying to sniff her?