Guess who’s back? Back again. Shady’s back. Tell a friend and take a listen to “Rap God” — the second track off Eminem’s upcoming album The Marshall Mathers LP 2. 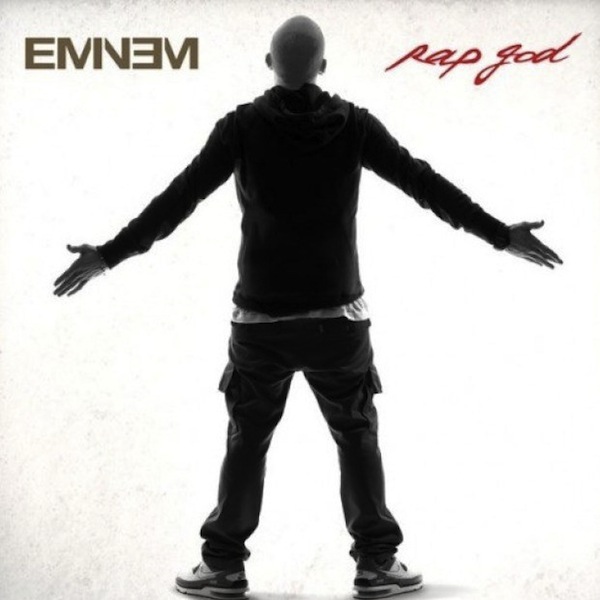 Eminem — like a lot of other artists are wont to do these days — took to Facebook this afternoon to release his new track “Rap God.”

The second track off his upcoming album The Marshall Mathers LP 2 due out Nov. 5, “Rap God” has Em proving why he (and not, say, Kanye) deserves the title.

The motormouth from the Motor City seems to be back on his game with this one. After “Berzerk,” which truthfully I didn’t like much, Shady seems to go back to basics with “Rap God.”

Eminem goes “Berzerk” on a Kardashian >>

He turns his tirade away from the Kardashians and instantly the flow is smarter. It’s brag rap at its best.

“They said I rap like a robot so call me rapbot
But for me to rap like a computer must be in my genes
I got a laptop in my back pocket
My pen’ll go off when I half cock it
Got a fat knot from that rap profit
Made a living and a killing off it.”

And as much as Em spouts how he’s a god, he also adds in the self-deprecation that makes him the most lovable, yet meanest rapper, out there.

“Me, I’m a product of Rakim, Lakim, Shahbaz, 2Pac and
W.N. Cube, Doc, Ren, Yella, Eazy, thank you they got Slim
Inspired enough to one day grow up, blow up and be in a position
To meet Run DMC and induct them to the motherf***ing Rock and Roll Hall Of Fame
Even though I walk in the church and burst in a ball of flames
Only Hall of Fame I be inducted in is the alcohol of fame
On the wall of shame.”

I’m not sure about that, Shady.

Eminem conducts his “Symphony in H” >>

Take a listen to “Rap God” below and let us know what you think. We probably don’t have to mention this, but it’s Eminem, so it’s NSFW.