Jon Bon Jovi made a fan for life by helping a bride out on her wedding day. He not only attended the wedding, he walked her down the aisle. 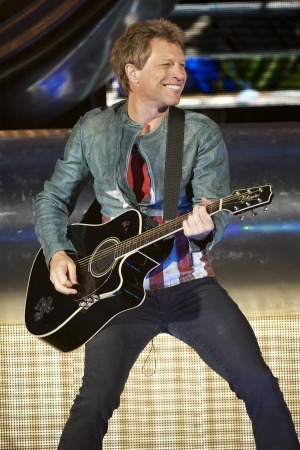 Jon Bon Jovi might be one of the nicest musicians in the entertainment industry right now. He made his ultimate fan’s dream come true by surprising her at her own wedding on Saturday.

The story began last August when Australian fan Branka Delic started a website called BonJoviWalkMeDownTheAisle.com to encourage the rocker to attend her wedding to Gonzalo Cladera. She organized her wedding date to occur the same weekend the band was in town for their “Because We Can” tour at the MGM Grand in Las Vegas, Nevada.

The couple wrote, “Bon Jovi… we’re begging you… make this wedding happen. There is plenty of time in the afternoon for you to come and walk her down the aisle before the show. We’re living on a prayer and we want you to come lay your hands on me and walk me down the aisle!”

The couple even made sure their Las Vegas chapel had some significance for the New Jersey musician. The Graceland Wedding Chapel is the same spot where Bon Jovi married his high school sweetheart, Dorothea, in 1989. How could the rocker refuse?

While he didn’t respond to her tweets or her website, he sure did get the message. The Grammy Award nominee surprised the bride by showing up just in time to walk her down the aisle. He even tweeted out a celebratory message and photo to honor the couple.

The newly-married gal even took the time to tweet out her appreciation.

Hey, if you can’t marry Jon Bon Jovi, he might as well walk you down the aisle.