Not all celebrities hate the paparazzi. Just ask Tori Spelling and Dean McDermott who were caught staging a paparazzi encounter during a family outing. 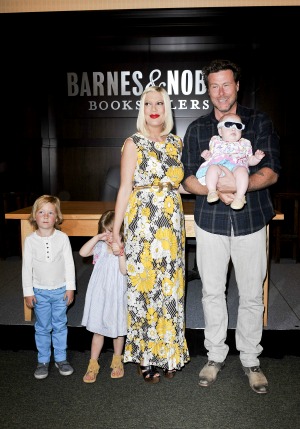 One of Hollywood’s dirtiest secrets was revealed on Sunday when reality stars Tori Spelling and Dean McDermott were caught staging paparazzi photos. What many fans don’t know is that some celebrities work with a personal photographer who sells their image and the stars get a cut of the sale.

RadarOnline caught the couple in the act this weekend at Pierce College Farm in Woodland Hills, California at a seasonal pumpkin patch. The husband and wife had their entire family along with them including Liam, 6, Stella, 5, Hattie, 2, Finn, 1 and Dean’s son from a prior marriage, Jack, 15.

The gossip site’s source said, “Tori and Dean posed in a pumpkin patch, on a carousel, hay bales, wherever the photographer told them to go.”

In fact, this isn’t the first time the Tori & Dean: Inn Love stars have done this.

“It’s well-known in the industry that Tori does staged photos to bring in extra income as she gets a cut of the sales,” said the insider.

Does Spelling really need the income or the publicity? It was just recently announced that she is starring in a new ABC Family pilot called Mystery Girls with her former 90210 co-star Jennie Garth. In fact, the actress is not only producing the show, she came up with the idea for the story.

The next time you see a candid photo in a magazine, take it with a grain of salt. Hollywood is all smoke and mirrors and Spelling isn’t the only actress in town guilty of faking paparazzi photos.