We loved her in Ringer and Beautiful Creatures, so SheKnows was thrilled to sit down with the onyx-haired actress, Zoey Deutch, to talk about shooting her new film and find out how closely it sticks to the novel. 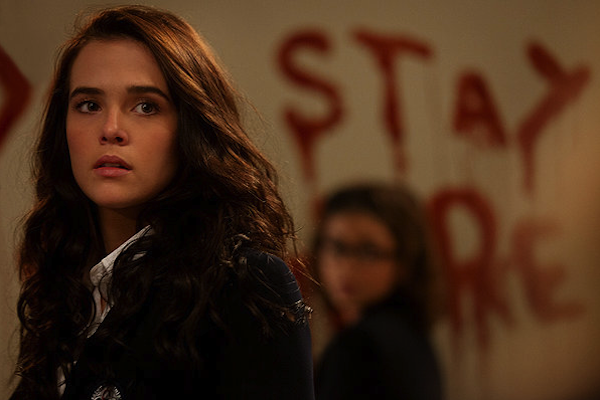 Think this is just another vamp movie? Think again. Deutch told us what makes this film stand out from others like it is, “It’s truly a story of friendship between two girls, and it’s very funny.”

Bloodsucking can be funny? “Yes,” said Deutch, who told us that director Mark Waters created a film that is similar in tone to classic teen dark-comedies like Mean Girls and Heathers.

She described the movie as, “Fun, sexy and suspenseful,” and also told us, “If you love to laugh and enjoy yourself, then you’ll love Vampire Academy.”

When we asked how she got along with the other actresses on set, she said that while she and cast mate Lucy Fry are “very different,” she became closest with Lucy and the two thespians have become good friends.

Loyal fans of the book will be happy to know that the movie stays pretty darn true to the popular YA novel. Deutch claims that author Richelle Mead made sure the filmmakers stuck to the novelist’s vampiric vision.

INTERVIEW: Lounging around with Richelle Mead >>

So, what did Deutch think of the book series? The daughter of 1980s star Lea Thompson said, “I only read the first book as to not anticipate too much from the rest of the story line and stay as true to my character as possible.”

The shoot itself was a bit of a bloodsucker, considering most of the filming was done at night. “We basically lived the life of vampires,” she said. That’s one way to get into character!

The good news about her sleep-depriving job? She definitely thinks she’s grown as an actress after shooting the dark comedy and wants to be an actress as long as possible. Well, Zoey, we think you have an immortal career ahead of you!