The royal family is on edge today after a man tried to rush palace grounds with a knife. Is London safe enough for little Prince George? 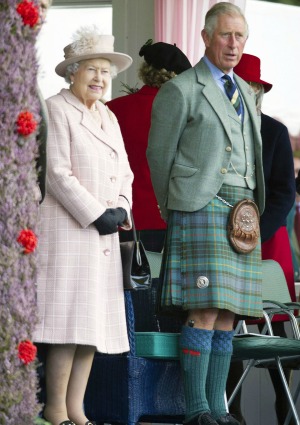 One is not amused. Queen Elizabeth is thanking her lucky stars she wasn’t in residence at Buckingham Palace today after a knife-wielding attacker was arrested sneaking around the royal home.

Officers tackled the armed intruder as he tried to rush through the north gate, usually open in reserve for vehicles. After being dragged to the ground, guards found he was carrying a weapon.

“Police have arrested a man following an incident that occurred at Buckingham Palace at approximately 11:30hrs today (Monday, 14 October 2013),” Scotland Yard confirmed in a press statement.

“A 44-year-old man attempted to enter Buckingham Palace via the north centre gate but was apprehended immediately by police. The man was searched and found to be in possession of a knife, which was seized.”

“He was arrested on suspicion of trespassing on a protected site (contrary to Section 128 of the serious Organised Crime & Police Act 2005) and possession of an offensive weapon.”

Queen Elizabeth and Prince Philip, who reside at Buckingham Palace when in London, were not present at the time of the attack. The monarch spends several months a year at Balmoral, her private residence in Scotland.

Prince William and his lovely wife Kate Middleton, along with the royal baby, were also safe as they had just moved into their luxe apartment in Kensington Palace — but a former security guard for the Prince said the risks for the family are very great.

In early September an intruder was arrested in a royal stateroom at the palace after scaling a 12-foot fence to break in. The next day Prince Andrew was forced to the ground at gunpoint by two armed police officers who mistook him for another intruder.

“Kate’s baby could be in danger,” Ken Wharfe, who guarded William, Princess Diana and Prince Harry many years ago, told Look magazine. “Given the political state of the world and the vulnerability of the royals, they need a lot of protection. In this terror-ridden world of ours, there’s a real risk of kidnap for this child.”

The man remains in custody at a London police station.