Kristin Cavallari and Jay Cutler are desperate to add another addition to their new family and have revealed they’re trying everything to get pregnant again. 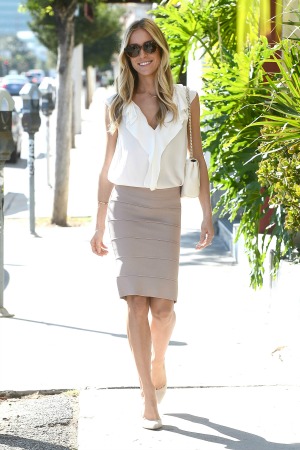 The beautiful Kristin Cavallari is loving motherhood and cannot wait to add another child to her little family.

The former The Hills star was willing to give up her acting career to become a mother to her 14-month-old son Camden, who she shares with her husband, Chicago Bears quarterback Jay Cutler.

The couple have been smitten since they began dating in fall 2010 before tying the knot this June in a low-key ceremony in Nashville, Tennessee, and the blond beauty is already trying for baby No. 2.

There is no time like the present for Cavallari. The former reality TV star revealed to radio station WCIU on Friday how excited her hubby and her are to have more children.

She said, “We’re working on it. We’re doing all the necessary things to get pregnant.”

“It’s funny because before we had Camden, I was like, ‘Yeah four kids, no problem!’ but now I’m like ‘Jay, it’s a lot of work!’ We might have another one and then see how it goes. If it’s a boy, then maybe try for a girl.”

The actress seems to have her heart set on a little girl this time around, as she previously revealed to Us Weekly in September 2013, “I would love to have a little girl, but if I had another boy, that would be great, too.”

All any mother really wants is a happy and healthy tot and Cavallari certainly appears to be a wonderful and dedicated celebrity mother.