Usually a control freak, Prince gave creative control of the video for his new single, “Breakfast Can Wait,” to 18-year-old dancer Danielle Curiel. 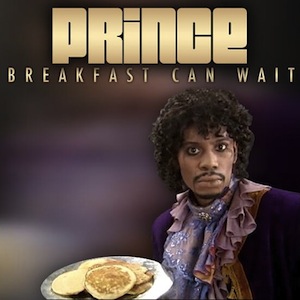 It seems that his 50s are treating Prince very well. He just seems happier.

As you recall, the album cover for his single “Breakfast Can Wait” showed comedian Dave Chappelle holding a plate of pancakes as an homage to Chappelle’s Comedy Central show.

What’s the story behind the “Breakfast Can Wait” cover art? >>

Well, Prince seems to have one-upped himself regarding the video.

Now the video really isn’t anything we haven’t seen before. There is a relationship vignette followed by some fierce dancing.

However, the true story behind this video is that Prince wasn’t in control of it.

He passed the torch to an 18-year-old woman by the name of Danielle Curiel, who also stars in the video.

The Los Angeles Times reports that The Purple One was so impressed by a treatment for the video that Curiel wrote that he gave her complete artistic and directorial control.

A spokesperson for Prince explained, “Prince wanted this video to be a creative encounter, offering fresh, young talent [the chance] to ‘visualize’ together. He was there for the shoot and approved the treatment, but gave all control to this 18-year-old. There were no managers, agents [or] label people there — just young talent collaborating for a very unique experience.”

As we know, Prince has had his struggles with label people in the past. In the 1990s, he officially changed his name to an unpronounceable symbol and often spoke out against his relationship with Warner Bros.

Curiel has an amazing mentor in Prince, and the video is pretty solid. While it’s cutesy at times, the dance scenes are terrific, and I wouldn’t be surprised if Curiel has a career ahead directing dance videos or even movies. This video is certainly better than any of those dance battle movies we’ve seen lately.

Take a look at the video for Prince’s “Breakfast Can Wait” and let us know what you think in the comments below.

And yes, that is Curiel dressed as Prince. She certainly has some small shoes to fill.