AMC’s The Walking Dead has cast Josh McDermitt and Michael Cudlitz in two crucial roles from the comic book series. Will their fates match those of the comic book characters? 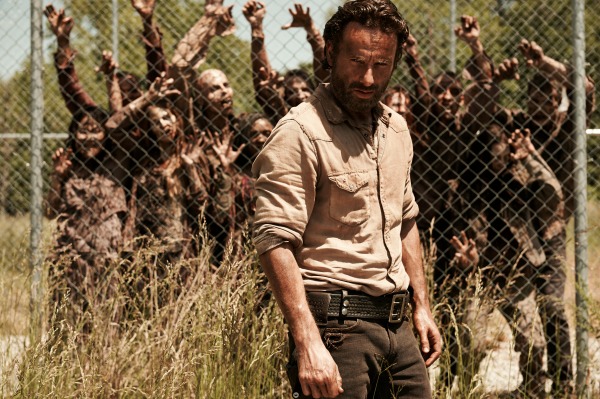 Fans of The Walking Dead comics will be happy to know that two key characters from the comic books will be making their way over to the TV version of the story.

The Walking Dead: Rolling Stone goes behind the scenes >>

The Hollywood Reporter reports that two roles based on the original Robert Kirkman series have now been cast. Actually, they’ve not only been cast, but the actors have already started shooting on the hit AMC series.

Josh McDermitt (Retired at 35) has joined the cast in a regular series role. McDermitt will play Dr. Eugene Porter, and his traveling companion will be Southland alum Michael Cudlitz.

The news came from this weekend’s New York Comic-Con event. Cudlitz helped make the announcement a special one as he jumped up from the audience (in character) when the producers introduced him from the stage.

Warning: Spoilers ahead from the comic book series, which could end up as spoilers for the TV series.

In the comics, Eugene and Abraham (Cudlitz) are traveling companions who have survived the zombie apocalypse along with additional companion Rosita (played by Christian Serratos). The group meets up with Rick and his group as they make their way to Washington. As with many of the characters on the show, there will be secrets among the newest members — including the fact that Eugene’s claim to know what caused the zombie outbreak will turn out to be one big, fat lie. Despite his lies, Eugene’s character becomes a vital part of Rick’s group by using his scientific knowledge to manufacture ammunition.

“We’re going to tell a version of the Eugene, Abraham and Rosita comic stories, that’s what we do,” showrunner Scott Gimple told The Hollywood Reporter. “I love those characters from the book, they are very different flavors of comic book characters than we’ve seen on the show.”

In addition to his lies about the cause of the zombie outbreak, Eugene has a unique way of hiding the fact that he’s a smart guy: He has a mullet.

“Josh looks breathtaking in a mullet, he was born to wear one,” Gimple said. “I can proudly announce we will see a mullet!”

As for Eugene’s traveling companion Abraham, his story in the comics is a tragic one. But the worst of his experiences weren’t caused directly by walkers. Abraham went out to hunt for supplies for his wife and two children and returned to make the horrifying discovery that his wife and daughter had been raped while his young son had been forced to watch. He eventually loses his family after they are turned into walkers and ends up as Rick’s right-hand man after the group loses a key man in battle.

Of course, there is no guarantee that any of the above plot points will be used in the TV series, but it’s possible that some of them will. The Walking Dead returns on Sunday, Oct. 13, for a brand-new season on AMC.

What do you think of the addition of these comic book characters to The Walking Dead‘s Season 4?