The marriages on Parenthood have faced many bumps in the road, but Season 5 might prove to be the biggest test yet for our favorite TV couples — and the future of the show! 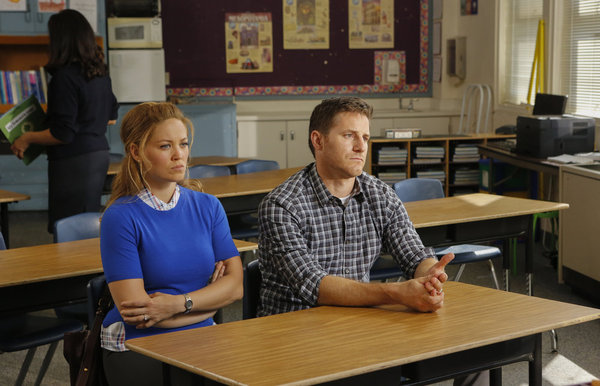 Parenthood isn’t doing great — in the ratings. Despite being one of the best dramas on television, it’s getting kicked in the pants by its Thursday night competition, Scandal. If you love the show, the time is now to rally around and get your friends and neighbors to start watching. Remind them that it’s not just about parenting — as Parenthood has unfolded over the seasons, the marital relationships have been just as important to the series as the titular story lines have been.

One of the most interesting couples to watch has been Joel (Sam Jaeger) and Julia Graham (Erika Christensen). The couple faced many challenges over the course of the first four seasons. It would seem that given everything they have been through, the Grahams should be able to survive anything thrown in their path. Yet, this season their marriage appears to be more rocky than ever.

Books for fans of Parenthood >>

When Joel was a stay-at-home father, Sydney was younger, and his time with her was more hands-on. There were playdates and craft times. Julia doesn’t have this experience. Julia is taking her frustration at her recent failure to re-enter the job market out on Joel by exerting control in an area where she feels she might have some — her active involvement in the lives of their kids.

When Victor’s teacher suggests that Victor might benefit from repeating the fourth grade because of his inability to read at the same level as other students, Julia and Joel have much different reactions. Julia feels as though Joel is discounting the work she did with Victor during the summer and isn’t valuing her ability to assess the situation. Their styles of parenting don’t mesh.

Both Julia and Joel are also forging meaningful friendships outside their marriage with members of the opposite sex. If they decide to take their issues there for discussion before taking them to each other, it will only to add to the other undeniable strains on their relationship. It’s agonizing to watch. They have been a couple who grew together and stayed together, but things don’t sit right now. Their smiles are forced, and their compromises feel desperate. Is separation in their future?

Zeek (Craig T. Nelson) and Camille (Bonnie Bedelia) are at a standstill with regard to their future. Zeek wants to keep the house, while Camille wants to sell and travel.

Zeek feels comfortable with their life as it is and wants to stay at the home where they raised their wonderful family, surrounded by their memories of the life they have shared. Camille, on the other hand, entered into marriage at a young age without ever having had a chance to see the world. She’s ready to cut ties to everything that has held her back from all of her romanticized notions of her future. She’s an artist with an artist’s eye. She wants to boat down the Seine and brag about her grandchildren to all of the interesting people she and Zeek will meet on their travels.

Can Zeek and Camille find common ground that will allow them to keep the family homestead but still give Camille a chance to follow her dreams?

Crosby (Dax Shepard) and Jasmine (Joy Bryant) are finding their footing with a new, colicky baby in the house. There is barely time to sleep or play with Jabbar, let alone time for romance. A meal out turns into an argument with their fellow townspeople. With Jasmine’s uneasiness around the Braverman clan and Crosby’s need to step out as a couple and and as a parent to Jabbar, how long until these two start to clash?

Kristina (Monica Potter) and Adam (Peter Krause) are living on the edge while she runs for mayor. Adam is concerned that the pressures of such an endeavor will cause her cancer to recur, but Kristina is invigorated by her second chance at life. The two of them have the same goals, but their paths to getting there are vastly different. The anxiety will likely cause even their deep love to be tested.

Do your part to save the marriages and Parenthood by tuning in every Thursday at 10/9c on NBC.