The best DJs know how to take seemingly unrelated songs and seamlessly combine them into a new, awesome song. SheKnows has compiled a list of our favorite musical mashups. 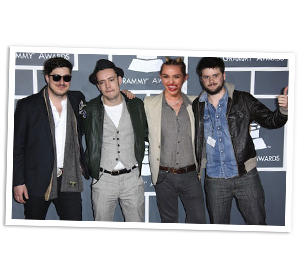 The best DJs know how to take seemingly unrelated songs and seamlessly combine them into a new, awesome song. SheKnows has compiled a list of our favorite musical mashups.

For years, Jordan Roseman, aka DJ Earworm, has been smashing all of your favorite songs together and making one mind-blowing mix. And just when you thought summer was over, the good DJ mixed all of this year’s top songs into 4-1/2 minutes. Robin Thicke is in there. So are Daft Punk, Macklemore & Ryan Lewis, Christina Aguilera, Rihanna, Demi, Icona Pop — they’re all there.

It’s almost to much to deal with, but here’s a tip: DJ Earworm makes for some great workout music!

San Francisco DJ Party Ben mixed this in 2004, and it remains one of the best mashups out there. The song mixes Green Day’s “Boulevard of Broken Dreams” and Oasis’ “Wonderwall” with Travis’ “Writing to Reach You” and then, at the last minute, throws in some of Eminem‘s “Sing for the Moment” — which itself samples Aerosmith’s “Dream On.”

Party Ben is known for his mashups. If you want more, check out his “Every Car You Chase” mashup, which combines The Police’s “Every Breath You Take” with Snow Patrol’s “Chasing Cars.” It’s awesome.

“Sweet Dreams Are Made of Seven Nation Army”
DJ Poly

Sometimes a mashup works so well that you think both songs must have been written by the same person. The Eurythmics’ “Sweet Dreams (Are Made of These)” was written in 1983, and 20 years later, Jack White of The White Stripes released “Seven Nation Army.” There may be a 20-year age difference, but this relationship totally works.

Female singers add their voices to the Miley/Sinead feud >>

New York City–based comedian Dan Chamberlain, aka Chambaland, thought what we all have at some point — what would have happened if Kanye West were in an English electronic pop band from the ’80s? Well, we now have our answer — “Personal Yeezus.” Taking Depeche Mode’s 1989 hit “Personal Jesus” and adding Kanye, Chambaland made a mashup of epic proportions.

And by the way, no, we do not want a personal Yeezus. One Kanye is enough.

OK. So I’m not sure what the mashup record is, but I think 16 different songs in one pretty coherent mashup is close. Michael Jackson, Bruno Mars, Britney Spears, CeeLo, Justin Timberlake, Lady Gaga, Taylor Swift, Snoop Dogg and Survivor all get mashed together in this strange yet mesmerizing mashup. How many songs can you find?

What do the politically active Aussie ’80s band Midnight Oil, Scottish twins who go by the band name The Proclaimers, Sia and David Guetta have in common? Nothing, unless you’re Austrian DJ Schmolli, who clearly heard something in “Titanium” that the rest of us ’80s lovers didn’t.

On his website, Schmolli admits that some may think it’s “a pretty strange combo,” but it’s bulletproof.

“Against The Floor”
Robin Skouteris

The ultimate diva mashup is here as Britney, Rihanna and J.Lo have been mixed and mashed. With the dance beat and three great songs, this is another tune that is perfect for working out.

In 2004, DJ Dangermouse mashed up the a capella raps from Jay Z‘s The Black Album with the music from The Beatles‘ The White Album. While The Beatles’ record label, EMI, wasn’t too happy about it, Ringo, Paul and Hova himself all thought The Gray Album was, in the words of Jay Z, “a genius idea.” Above, we have Jay Z’s NSFW anthem “99 Problems” mashed with The Fab Four’s “Helter Skelter.”

“Singin’ in the Rain”/”Umbrella”
The cast of Glee

You didn’t think we’d leave a Glee mashup off our list, did you? Besides this song being one of the only times that I didn’t cringe when Mr. Shue started singing, guest star Gwyneth Paltrow lends her voice to this awesome mashup. I’m also a sucker for the whole dancing-in-water thing. This is a perfect example of a mashup where you really wouldn’t have thought the two songs go together, but once they are put together, you can never hear them apart.

Admittedly, this is more of a medley than a mashup, but there is some mixing, so we’re giving it a spot. Besides, we love these two very funny women.

You will certainly recognize Riki Lindhome and Kate Micucci from every time they show up in a show and steal the scene (just watch Raising Hope or last week’s New Girl). Along with being talented actresses, they have also been a comedy team for quite a while, posting hilarious songs to YouTube. This was one of their first.

What do you think of our list of the best mashups? Did we miss your favorite? Let us know in the comments below.