Michael Douglas told the press he had throat cancer, but he really had tongue cancer. He wanted to recover with a bit of privacy, and it worked. 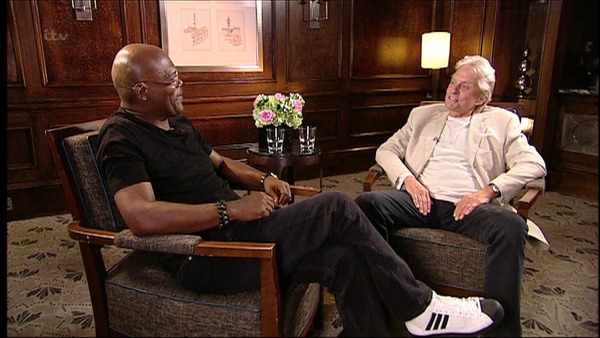 Michael Douglas has had a challenging few years on the the personal front. He separated from wife Catherine Zeta-Jones (who also battled bipolar disorder), and he was diagnosed with cancer. So fans will have to cut the guy some slack for fibbing a bit about the type of cancer he was suffering from.

In a new interview with fellow actor Samuel L. Jackson on the U.K. talk show This Morning, the Behind the Candelabra star revealed the truth about his diagnosis.

Douglas told Jackson about the moment he knew he was ill, saying, “[The doctor] just took a tongue depressor and — I will never forget it — I saw this look in his eye. And I went, ‘Oh.’ And they took a biopsy, and two days later, they said, ‘You have cancer.'”

It wasn’t an ideal time for the 69-year-old actor because he was on a European tour to promote his latest movie, Wall Street: Money Never Sleeps.

“You can’t cancel a worldwide European tour junket thing and say, ‘I don’t feel well.’ You gotta tell ’em. So I said, ‘We just gotta come out [with the diagnosis],'” said Douglas.

His medical team did come up with an answer for the Oscar winner to give the press, but it was a little different from the actual diagnosis.

“He said, ‘Let’s just say it’s throat cancer… We don’t want to say it’s tongue cancer,'” the dad of three explained. “I said, ‘Why is that?’ He said, ‘Well, if you really want to know why — if we do have to do surgery, it’s not going to be pretty. You’ll lose part of your jaw and your tongue, and all of that stuff.'”

Douglas was fortunate enough to not lose his tongue, but he lost a significant amount of weight, which sent the tabloids into a frenzy about his demise. However, the actor proved them wrong, as he recently passed the two-year mark with a cancer-free bill of health.

“With my type of cancer, if you’re clean after two years, there’s a 95 percent chance it’s not coming back,” he said.

He also knows how fortunate he is to be alive, but he shared some health advice with his male fans.

Douglas said, “Hey guys, you look at your body every day. You know every mole, everything that’s there. You see something that looks a little strange, you feel a bump somewhere, check it out — please. I made the mistake. I don’t want to see you do it.”

The actor will next be seen in Last Vegas, which hits the big screen on Nov. 1. He co-stars with Robert DeNiro, Kevin Kline and Morgan Freeman.