Rose McGowan has been engaged twice before, but she has never gone through with the wedding. Davey Detail finally sealed the deal with the actress on Saturday. 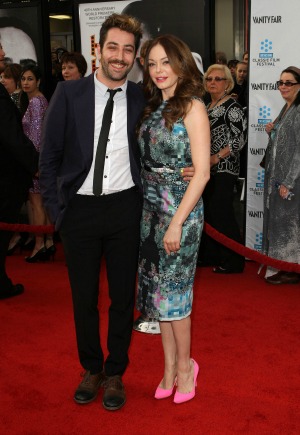 Rose McGowan is officially a Mrs. after walking down the aisle on Saturday at the Paramour Mansion in Silver Lake, California. She married artist Davey Detail after getting engaged in July.

According to People, approximately 60 guests were in attendance for the 15-minute ceremony. The former Charmed actress’ gown was designed by Monique Lhuillier. Her hair was swept up in a bun, and she carried a bouquet of pink flowers.

A source for the entertainment magazine described the special moment as “romantic and ethereal.”

Us Weekly had a few details on the reception, which was in an outdoor courtyard with twinkling white lights during cocktail hour. A New Orleans swing band added music and atmosphere to the festive event.

The 40-year-old actress was previously engaged to two other familiar faces in Hollywood, but the engagements never resulted in a walk down the aisle. Her first engagement was to shock rocker Marilyn Manson back in 1998, and her second engagement was to Machete Kills director Robert Rodriguez in 2007.

The newlyweds are headed to Tahiti for their honeymoon.

McGowan told Us Weekly recently, “I’ve never been. I’ve always dreamed of having one of those little huts over the water.”

The actress will next be seen in The Tell-Tale Heart starring Peter Bogdanovich, to come out later this year, and The Last Duane with Danny Trejo and Jason Patric, which will hit theaters in November 2014.