The real reason why Bruce and Kris Jenner split up was that the Kardashian house got way too crowded. When Kim and Kanye moved in with baby North, Bruce reached a “breaking point.” 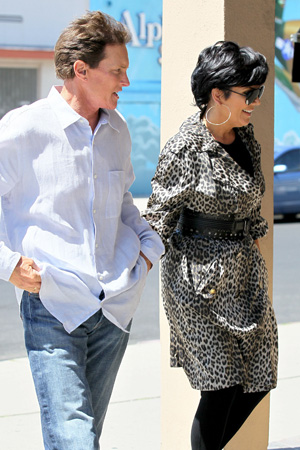 There is no shortage of rumors about why Kris and Bruce Jenner broke up, but a new report claims the reason the reality couple separated is that the Kardashian home had become too crowded.

According to a source for People magazine, once Kim Kardashian; her boyfriend, Kanye West; baby North and their whole entourage of nannies moved into the house, the Jenner patriarch reached a “breaking point.” His relationship with his wife of 22 years became increasingly strained because of the overpopulated home situation.

“It got crazy,” the source said. “It was all about Kim and North and no one paid Bruce any attention, especially Kris.”

The Kardashian household was already full to the max with the Jenners’ two daughters, Kendall and Kylie, plus constant visits from Khloé Kardashian.

“This was Bruce’s house too, and he had no room. He felt he was being shoved into a corner,” the source added.

So, the former Olympic athlete and the reality mother of six decided to separate, and Bruce moved into his own pad in Malibu.

“He’s much happier,” the source revealed. “He loves it there.”

Not long after their separation was announced, Kris insisted to People that she and Bruce are “just happier now” and continue to be friendly and in contact with each other.

Bruce Jenner calls out Kanye West: “He’s not around” >>

“We will always be the best of friends, because that’s the dynamic of our relationship… We’re so connected in that way. We love each other,” Kris said. “People that are best friends and that love each other don’t necessarily have to be married.”

Meanwhile, the Jenners have made sure that everyone knows they are fine with the separation and that Bruce’s two children are not feuding with Kris.

Kris and Bruce Jenner before the split: 10 Troubling moments >>

Recent reports claimed that Bruce’s kids — Brandon, 32, and Brody, 30 — were super thrilled that their father had finally left Kris. So, in response to the rumors, the four Jenners posted a happy photo of themselves on Instagram showing how well they are still getting on.

“Another amazing night @brodyjenner @sprandoni and Bruceeeeee!!! Too fun I love you guys!!!” Kris wrote along with the snapshot. “Best hearts #sorryTMZgotitwrongAGAINLOLFollow.”