Lady Gaga came back from her trip to Brazil with a little extra, a prison tattoo, and the tattoo artist has just revealed all the intimate details of the sitting. 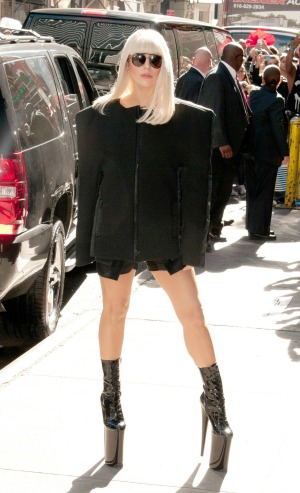 Lady Gaga is not known for her good taste — in fact she likes to be a little different, as her “Rio” ink reflects.

During a trip to Rio De Janeiro, the “Bad Romance” singer decided to call on Brazilian tattoo artist Daniel Tucci, who owns a tattoo parlor called King Seven Tattoo, where Gaga decided her tattoo of choice was the word ”Rio” etched onto her neck.

While the tattoo resembles that of a prison tattoo, Gaga was rather thoughtful, because she did use a design that one of her fans apparently created for her. The “i” of the word “Rio” is said to resemble the city’s Christ the Redeemer statue.

Tucci revealed the details about his very famous patron to The Mirror, saying, “Gaga came to me and said she wanted a tattoo that looked like something done in a prison — edgy, gray, I suppose a bit scary.”

”She wanted a design that a fan had given her, the word ‘Rio’ where the letter ‘I’ was the Christ. She told me she wanted it to look like a prison tattoo, not a nice design, a bit shadowy. ‘Like something done in prison,’ was the term she used.”

“She didn’t want it to look really sharp, but more like an amateur tattoo. It’s on the back of her neck, just below the hairline — she got her hair especially shaped to show the design.”

While it may not have been a showcase of the tattoo artist’s skill, the singer appeared to be very pleased with her latest design and shared it with her fans via Twitter, along with a new shaved hairdo.

Apparently, Gaga is as tough as she seems and did not appear to feel the pain during her sitting, as Tucci revealed, ”She was laughing with her friend and listening to music all through the inking. She never flinched with the pain.”

The “Applause” songstress, however, may not be quite as independent as many may have thought. Gaga doesn’t just do whatever she wants, whenever she wants — she asks permission from her boyfriend first…

Gaga has been dating her boyfriend, Taylor Kinney, for the past two years and clearly did not want to upset him with her new neck ink and called Kinney first. Smitten much?

Tucci revealed,  ”Before getting the tattoo done, she didn’t make a move before she called Taylor.

”She asked him if he was OK with what she was doing and when she hung up she said, ‘I love my boyfriend so much, he is the right guy for me. He never has a problem with anything I do and I always ask him first… but I can do whatever I want and he will never complain.’ She said he was very cool about the tattoo.”

What do you think Lady Gaga’s next tattoo will be?