There appears to be little animosity in the Kardashian-Jenner household post-split, but two people who are thrilled at the news are Bruce Jenner’s sons Brody and Brandon. 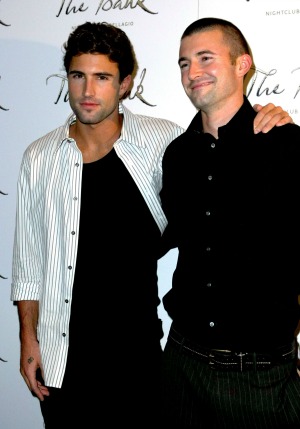 You would think there would be some heartache after the end of a 22-year marriage. However, with Bruce Jenner and Kris Jenner that does not seem to be the case.

It has been reported that everyone is happier now that the pair have split and that includes Bruce Jenner’s sons. Bruce’s sons from a previous marriage are reportedly jovial that he is saying goodbye to Kardashian matriarch Kris.

It is no secret that The Hills star Brody Jenner has never gotten along with Kris, and he and his brother Brandon Jenner are now rejoicing that she will no longer be a part of their lives.

So why did the pair never get on? Well, according to sources at TMZ, the Jenner boys believed Kris took their dad away from them and left them without a father figure — they were raised their mother Linda Thompson and her new husband, David Foster.

The Olympic Gold medalist forgot his young sons and reportedly did not even pay child support for them for more than 10 years! After which Bruce tried to make up for his failed parenting by paying $1,500 a month.

TMZ’s sources also claim Brody and Brandon are bitter toward Kris because she took their dad away from them to make a new family.

Don’t worry though, just because the former couple are now separated still means it’s business as usual. The reality TV show Keeping Up With the Kardashians will continue filming and will include the details of the separation in Season 9.

Bruce told People magazine that his life is great after the split from his wife, saying,”I’m doing great. Kris is happy, I’m happy. Nobody is filing for divorce.”

Although a divorce is not in the immediate future, the couple certainly both appear to be happy. Kris also revealed her joy to People, saying, “I really can’t put my finger on it. We’re just happier now.”

“There was definitely a shift in the way we treated each other. We will always be the best of friends, because that’s the dynamic of our relationship. We definitely get along as a family and with the kids; we’re so connected in that way. We love each other.”

However, Kris does seem to have one regret in her life and it’s not the fact that her current marriage is falling apart.

Speaking to New You magazine just before the split news, she confessed, ”The one regret, if I had to do it over, would be divorcing Robert Kardashian. But then there wouldn’t have been Kendall and Kylie, so that’s the way I look at it.

”Everything happens for a reason, and we learn from our mistakes. I thought I was so smart when I was young; I was fearless.”