For someone who has starred alongside the likes of Johnny Depp and Nicolas Cage, Amber Heard is impressively nonchalant about her fame. But what else do we really know about this blond beauty? 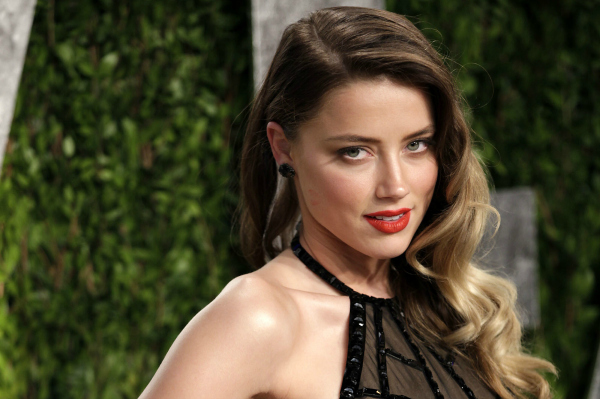 She pulls pranks on set with sex toys

She had a longtime girlfriend before Johnny Depp

Lasting a month in Hollywood as a couple is a feat, much less 4½ years — the length of time Heard spent in a committed relationship with artist and photographer Tasya van Ree. She now openly speaks about her bisexuality and asserted in an interview with Elle that she’ll never regret the time she spent with van Ree. “I didn’t want to look like I was hiding anything,” she told the magazine. “I’m not, and wasn’t ever, ashamed.”

This Texas-bred gal loves her some guns

Raised in a small town in Texas, Heard knows her way around a firearm. When she decided to follow her dreams and move to California, her father tried to give her a gun — at the airport! But hey, albeit illegal in that particular venue, at least her dad offered her a pretty one: a pearl-handled .38 special. Heard has since fessed up to owning other firearms, such as a .357 Magnum.

She busts her a** for that body

Heard has one of the best bodies in Hollywood, but she isn’t jumping on the “I’ve just good genes” bandwagon. In addition to watching what she eats and drinks, she enjoys running, playing tennis and taking Pilates. “There’s no ‘I don’t diet, I eat what I want, and this is how I look,” the leggy beauty told Women’s Health in a recent interview.

She’s not afraid of betting big

Determined to make her way to Hollywood, Heard earned her GED at age 16 and headed to LA with little more than a 60-buck baby-sitting payout and some head shots she’d had made at a copy center. The actress told FHM, “In retrospect, it was kind of brash, because I didn’t know anybody here, had very little money, no name and almost nothing to go on. But I wasn’t scared, so I told my parents the day I left that I was catching a plane.”

Looks and brains? So unfair, but Heard’s got both in spades. On the set of the photo shoot for men’s magazine FHM, the cerebral stunner passed idle time by reading The Portable Atheist by Christopher Hitchens. “I can’t say much about television, because I don’t watch it,” she says. “If I could pick up a pencil and make any sort of sense, I would be an author.”

Amber Heard talks about bisexuality: “I wasn’t ever ashamed” >>

She works hard for the money

Don’t let her looks fool you… Heard doesn’t get a free ride for being beautiful. To land her part alongside Johnny Depp in The Rum Diary, it took persistence on her part. “I auditioned several times for this part, and it was a grueling process in my opinion, just because of nerves and a lot of energy that goes into any such process,” she asserts. “But I think the best things in life and the most rewarding things in life are the ones that don’t come easy anyway, so this was no exception to the standard.”

Her face is apparently forgettable

Although we can’t imagine how anyone could ever forget a flawless mug like Heard’s, her Paranoia co-star Richard Dreyfuss managed to do so on more than one occasion! Even though they filmed the movie together and spent plenty of time together, Dreyfuss just can’t seem to keep Heard’s identity straight in his head these days.

There’s not much she wouldn’t do for her job

Heard is realistic about how the industry works. “At first, you’ve got to take guest appearances on TV shows, which I did plenty of,” she says. “I did plenty of topless scenes, too, which are in movies for no reason other than they’re topless. I paid that small price, which you have to do to go further. But I always knew what I was doing in a movie. If my role was nothing but that, I could make the decision, as an adult, whether to use it to my advantage or not.”

Classic cars are her vice

Some entertainers smoke. Some drink. Some go on angry Twitter tirades. But Heard blows off steam by working on her classic cars. “I spend all my money on classic cars,” she enthuses. “I’ve had loads. Right now, I have a 1968 Mustang and a 1967 Mercedes 250SL. I try to fix them up myself as much as I can, buying the parts on eBay.”