The Vampire Diaries is coming on pretty Silas-heavy. He’s big, he’s bad and he intends to blow the house down unless he gets his hands on Katherine. What can we say? We like a man who knows what he wants. 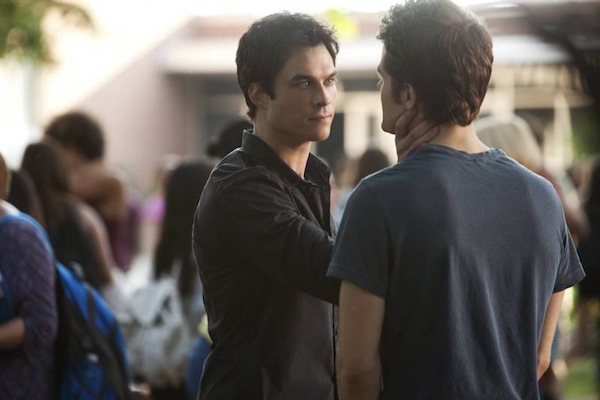 This season of The Vampire Diaries is off to such a great start. I’ll try to keep the gushing to a minimum, but I’m hooked. Just when I thought the show was going to take a nose dive, Season 5 has blown me away by focusing on the core characters we love and giving us a storyline that’s really intriguing.

Review of The Vampire Diaries premiere >>

Let me just say, I laughed out loud at a few points during the episode tonight. Gotta love a little humor to spice things up and Caroline delivers. Here were her best lines of the night:

Liz and her deputies sweep the quarry at Damon’s request and discover the safe. When they open it, there’s a dead guy inside with a nasty bite mark on his neck. Stefan got out somehow and is now roaming who knows where with who knows what kind of damage after being locked underwater for three months.

We’re kinda glad we don’t have to just watch shots of Stefan (Paul Wesley) drowning and daydreaming about Elena anymore. Although, it is creepy that he was able to communicate his feelings to Elena. Do they have some psychic connection because they’re soul mates? Not that we don’t love, love, love Delena but, let’s be honest, we haven’t seen the last of that infamous love triangle.

Cara and that creepy dude from last week aren’t witches but gypsy/travelers. And they’re after Silas for some reason.

But Cara has her own agenda, whatever that means. We don’t get filled in just yet because Silas can read her mind. Whatever is in there, he likes it enough not to kill her. She knocks out the guy she’s been traveling with. It looks like she’ll be joining Team Silas, the first person to do so willingly this season.

Elena has decided to forgo her education in lieu of finding Stefan. Since he’s out of the safe, we’re hoping her extended vacation doesn’t last very long. The vampires-at-college scenarios are really great! Sure, Caroline will still be there, but the girls get themselves into much more awkward situations when they’re together.

Not to mention this Dr. Maxfield, who knows about Elena and some information about her father. In a strange turn of events, when Maxfield offers to talk to Elena about her past, she declines. Her worry for Stefan is so great she isn’t even concerned about the mystery with her father and his connection to Megan. That’s pretty intense! Again, we doubt her time away will last long. We’ve got to get back to the vampire cover-up at college, after all.